Innocent leaps to defence of smoothies with new sugar research

With fruit juices and smoothies lumped in with fizzy drinks in the war raging on sugar, Innocent Drinks this week launched the “case for the defence” of its fruit-based no-added sugar drinks.

Three academic papers, produced by researchers at Oxford Brookes University and the University of Aberdeen, were commissioned by Innocent to convince medical experts of the nutritional benefits of fruit juices and smoothies and to contradict what it claimed were “alarmist headlines”.

In the first study, scientists at the Department of Biological and Medical Sciences, Oxford Brookes University, claimed suggestions that puréeing fruit destroys the cell wall matrix that gives fruit its structure and makes smoothies less fibrous than fruit eaten whole were not justified.

“This is particularly evident when you look at a smoothie under the microscope and can see big chunks of undamaged cellular material,” said lead author Professor Chris Hawes. The researchers found smoothies contained comparable fibre to that contained in whole fruit.

A second study by researchers at the Rowett Institute of Nutrition & Health, in Scotland, identified at least 48 different antioxidant compounds in four Innocent drinks, which Innocent said backed its claim that no-added sugar smoothies and juices have health benefits which mean they should be treated differently to other products high in sugar. “The fruit juices and smoothies were found to be rich in bioactive phytochemicals,” the researchers said.

“The smoothies contained a wider range of compounds whereas the juices were found to contain fewer compounds in the higher concentration range, but contained large amounts of single phytochemicals; namely hesperidin in orange juice and chlorogenic acid in apple juice,” the authors concluded.

In the third study, Oxford Brookes Functional Food Centre found sugars in strawberry and banana and mango and passion fruit Innocent smoothies had a low GI value, meaning the naturally found sugars were absorbed slowly by the body so they have no greater impact on potentially harmful blood glucose levels than eating an apple.

Fruit juices and smoothies have been dragged into the storm over sugar, with head of the Responsibility Deal food network, Susan Jebb, claiming they were as bad for the body as a can of Coke and questioning whether they should be dropped from the DH’s five-a-day ­recommended list.

Public Health England has been drawing up proposals for a sugar tax as part of a package of potential measures to be unveiled next Thursday, alongside the SACN committee report on carbohydrates.

“We are really pleased to have the evidence to back up what we have always believed: that one of our smoothies or a juice a day is good for you as part of a balanced diet,” said Innocent Drinks CEO Douglas Lamont. “Our job now is to make sure we share this evidence with the people leading the debate.”

Innocent admits one 250ml Innocent smoothie provides nearly a third of the daily reference intake for sugars that experts recommend. 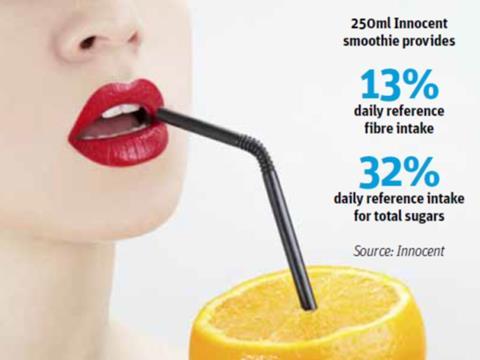