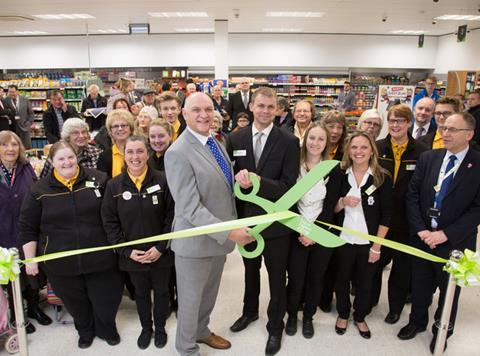 A new East of England Co-op store opening in Coggeshall

The East of England Co-operative is investing £21m on refurbishing a further 60 stores this year following a £15m spend on 46 stores in 2015.

Joint chief executive Doug Field said that despite food sales being down £2.9m to £262m (£265m in 2014), they were now up an average 4% in the majority of the refurbished stores.

“We invested £15m this year to improve our customer experience and we will be investing £21m next year,” Field told The Grocer.

The focus during 2015 was to ensure the long-term prosperity of the business with food store refurbishments, opening of four new stores plus 10 new post offices.

The society also incorporated six Subway concessions, with a seventh being added shortly, and up to six more going into food stores this year.

“Extending our offering to our members and customers, we also entered into new retail partnerships with Subway, Brantano and others, as well as expanded our trading area with new optical branches in Chelmsford and Braintree,” Field said.

The Ipswich-based society has in excess of 200 retail outlets across Essex, Norfolk and Suffolk, including 132 food stores of which 77 are c-stores.

However, Field told The Grocer he believed the food market in its area was now saturated and it had no plans to build new stores.

“What we propose is to look to existing food businesses looking to sell,” he said.

The closure of uneconomic stores, reduction in size of others and temporary closures were the main cause of the fall in food sales.

“Sourced Locally is our key point of difference which gives people a reason to come to us, so it is very important,” Field explained.

“There is no doubt that 2016 is going to be a tough year, with the introduction of the national living wage and the removal of tax breaks for purchasing green energy,” Field concluded. “The new business tax for apprenticeships is also an additional cost in the future that’s beyond our control.”