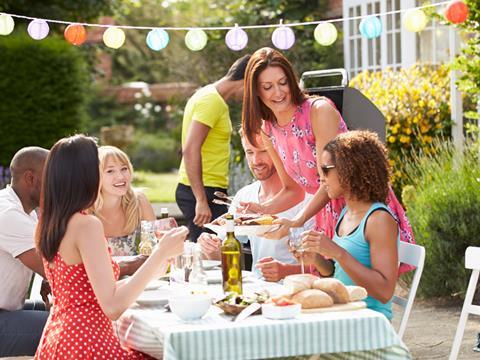 Grocery sales jumped up 2.7% over the most recent 12 week period as the early summer weather boosted food and drinks sales, according to the latest grocery market share figures from Kantar Worldpanel.

Tesco (TSCO) and Sainsbury’s (SBRY) both saw market shares drop slightly as a result compared to 2017, while Asda and Morrisons (MRW) both held their share of the grocery market.

Tesco sales grew 2.2% over the period, behind the market average, and it resulted in it dropping its market share by 0.1 percentage points to 27.7%.

Proposed merger partner Asda had a more positive period, growing above market average at 2.8%, boosted by a 7.6% increase in online sales.

Morrisons was the strongest performing of the big four, recording 2.9% growth for the period.

Aldi and Lidl continued to see the highest industry growth, increasing sales by 6.7% and 10.4% respectively for the period.

Lidl was the only retailer, other than Ocado (OCDO), to record double-digit sales growth for the period, on the back of strong branded sales, said Chris Hayward, consumer specialist at Kantar Worldpanel.

“Over the past 12 weeks Lidl was the only bricks and mortar retailer to experience double-digit sales growth – up 10.4%,” he commented.

“Branded sales have played a pivotal role for the discounter, accounting for 30% of Lidl’s growth. Aldi also continues to perform well: with sales up 6.7%, its market share grew by 0.3 percentage points from 7.0% to 7.3%.”

“Morrisons has been enjoying a successful run of form. The retailer has now celebrated 19 consecutive periods of sales growth and has held market share at 10.5%,” said Chris Hayward.

“The supermarket succeeded in attracting an additional 311,000 new shoppers through its doors. Morrisons saw its alcohol sales increase by almost 8%, while the relaunch of the grocer’s own-label line ‘Savers’ also contributed to overall performance.”

As it continues to grow internationally, Ocado has also posted strong growth as it attracted an additional 132,000 new households over the past 12 weeks and has seen its year-on-year sales increase by 12.7%.

While the disposal of 300 McColls stores is still impacting headline performance, Co-op has experienced sales growth of 1.5. Despite experiencing marginal year-on-year sales growth of 0.3%, Waitrose saw its market share fall back by 0.1 percentage points to 5.1%.

Kantar added that hot weather during the 12 week period will have helped to provide a boost to the sector.

“The sun shone on the grocery market over the past month with record-breaking temperatures, a bank holiday weekend and Royal Wedding fever all contributing to a bumper period,” he said.

“The Friday before the day of the wedding and the FA Cup Final experienced a particularly noticeable spike in sales, with grocers clocking in £415 million over the 24 hours.”

The discount retailer saw sales increase 22.4% to £2.97bn for the 53 weeks ending 31 March 2018, despite a recent downturn in high street spending.

The retailer was boosted by its acquisition of northern frozen food chain Heron Foods, after it was purchased in a deal worth £152m.

The frozen food retailer generated £210m in sales over the year, and has helped to enable the roll-out of frozen and chilled food sections to 72 B&M stores over the period. Over the eight months of ownership it generated £11.7m earnings before tax and interest (EBITDA).

Heron Foods announced expansion plans earlier in May, with the opening of 30 new stores as it looks to expand further south in the UK.

The company said that lessons from its UK business are being introduced to a new management team at its German retailer, Jawoll, which it purchased in 2014.

Jawoll’s adjusted earnings before tax and interest reduced by 51.9% to £5.6m for the year, from £11.7m, with the company targeting a return to growth for the current financial year.

B&M’s model is “high relevant” to customers in the difficult economic environment and the business is “well-placed for long-term growth despite challenges in the sector, said chief executive, Simon Arora.

“B&M has delivered another set of strong results by doing what we do best, which is providing great value week-in, week-out on the things customers buy regularly for their homes and families,” he commented. “None of our success could have been achieved without the hard work and dedication of the thousands of B&M colleagues across the Group and on behalf of the Board I would like to thank them for all their efforts.

“The B&M model is highly relevant for the current difficult economic environment, with its strong position in the value and convenience areas of retailing where physical stores are winning. The business is well placed for continued profitable, long-term growth. In a retail sector beset by structural challenges B&M’s unique, disruptive model stands out as a success story.”

A new 1m sqft Southern distribution centre is now under construction and is due for completion in spring 2020, to enable future expansion.

It added that the first quarter of the new financial year has started positively, with 3.1% like-for-like sales growth in B&M fascia stores, excluding Easter week.

Recommended final dividend increased 23.1% to 4.8p per share to be paid on 6 August 2018, bringing the full year ordinary dividend to 7.2p per share.

Elsewhere, shop prices fell by 1.1% in May 2018 compared to the same month last year, according to the latest BRC - Nielsen Shop Price Index.

This represents the 61st month of falling Shop Prices and the deepest deflation since January 2017.

BRC chief exec Helen Dickinson commented: “Overall shop prices fell again in May as the impact of the pound’s fall following the EU referendum reduces and the challenging retail environment continues to mean retailers must compete on price.

“While food inflation has increased this month as the weather, oil price and other geo-political factors have influenced global agricultural markets, we expect overall prices to fall in coming months.”

”Retailers’ overall sales revenues are under pressure from falling prices and this comes at the same time as business rates and other public policy decisions are pushing up operating costs; leaving retailers squeezed at both ends. The consequences of which have been plain to see.”

On the markets this morning, The FTSE 100 has remained fairly stable in early morning trading, dropping just 0.02% to 7,630.pts.

The FTSE 100 suffered its biggest fall in two months, as it slid back 1.2% to 7,632.64pts, as political turmoil in Italy hit banks such as Barclays.

Payment service company PayPoint (PAY) fought off the downward trend to jump up 3.3% to 1,010p, after announcing yesterday that its new PayPoint One technology will be installed in 9,000 retailers by December 2019.

Marks and Spencer (MKS) dropped 4.1% to 298p as it looks set to narrowly avoid being forced from the FTSE100 following its downward slide.

Convenience retailer McColl’s (MCLS) slumped 3.9% to 244p as it reflected the day’s downturn.