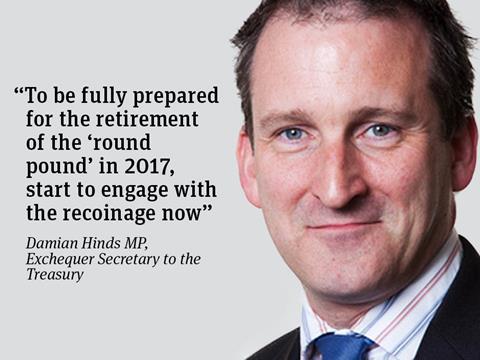 The chancellor recently announced that production of the new and highly secure £1 coin has started. In what will be the biggest recoinage of the century, the new pounds will enter circulation in March 2017 and have already started rolling off the production line at a rate of over 4,000 a minute.

Recoinages are sometimes necessary in all economies and can happen without most people noticing, but this is the first time ever a £1 coin has been replaced.

The ‘round pound’ has faithfully lined our pockets and purses for over 30 years but because of its increasing vulnerability to sophisticated counterfeiters it is now time we replaced it. The new 12-sided coin that will replace it resembles the old ‘threepenny bit’ and will be the world’s most secure coin in circulation.

Despite good progress to crack down on fraud, levels of counterfeit £1 coins have been as high as 3% in the past few years, equating to around 45 million coins. To put that into context, if you were to place each counterfeit pound coin side by side, the trail would stretch from London to Inverness!

But with groundbreaking technology, developed in the UK, the new coin will reduce the costs of counterfeits to businesses and the taxpayer.

In my role as a Treasury minister I have asked the Royal Mint to make all businesses that handle cash aware of this change and help them prepare for it.

Last week I invited key figures from the cash-handling industry including representatives from the banks and retail industry to Whitehall to learn more about the coin and what they will need to make sure they’re ready. These collaborative efforts are part of a phased plan that began several years ago, and because of early dialogue with key stakeholders like the British Parking Association and the Automatic Vending Association we are confident of a smooth transition.

Starting in early 2017, banks will begin to remove the old coin from circulation, but like other recoinages there will be a six-month period of co-circulation from when the new coin is launched. During this period the current £1 and the new £1 coins will both be in circulation.

So if you or your suppliers routinely handle cash as part of your operations, to ensure you are fully prepared for the retirement of the ‘round pound’ in 2017 you should start to engage with the recoinage now. The Royal Mint will continue to work with key industries and businesses up to and beyond the introduction phase of the new £1 coin. An awareness and education campaign is imminent and you can even request a sample of the new coin to test equipment.

While it’s clear there remains a lot of work to do, to change the design of the pound was not a decision we took lightly. We know this will cause a short period of inconvenience for the cash-handling industry. But the current £1 coin has been in circulation much longer than the normal lifecycle of a modern coin and the best long-term solution is to introduce a secure replacement that will end high counterfeit costs to business and the taxpayer.

Damian Hinds MP is Exchequer secretary to the Treasury