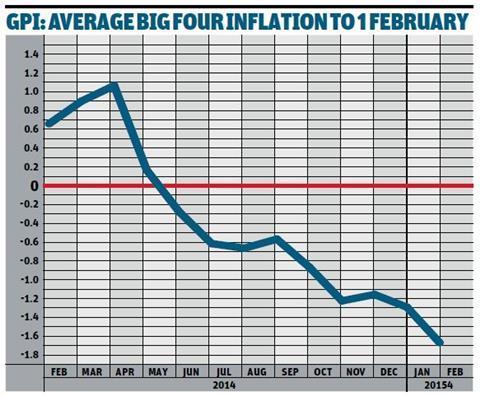 Annual food deflation has reached record levels, but grocery prices were nevertheless higher in January than over the Christmas period.

Despite the supermarkets’ recent high-profile price cuts, month-on-month inflation stood at 1.1% in the month to 1 February, according to The Grocer Price Index, which is collated by BrandView from over 60,000 grocery items across the big four supermarkets.

However, on an annual basis, food prices remain on a firm downward trend: the GPI shows year-on-year deflation jumping from its previous high of 1.3% for the month to 1 January to a new record of 1.7% in the month to 1 February.

Each of the big four saw prices fall, but Sainsbury’s once again showed the greatest level of deflation (as it did last month), with prices 2.8% lower than they were a year ago.

Sainsbury’s announced a £300m investment in price cuts last month, but its current level of deflation largely appears to be the result of an uptick in promotions. Its average prices fell by 7.4% in the chilled category, by 6.2% in health & beauty and by 4.6% in soft drinks.

With annual deflation of 2.4%, Morrisons saw prices fall by the next greatest amount - aided by an 11% fall in the price of frozen goods - while deflation at Asda and Tesco fell 1.1% and 1% respectively. Waitrose, not included in the overall GPI figures, recorded annual price deflation of 0.5%.

Tesco showing the lowest year-on-year price deflation of the big four may come as a surprise given its recent, well-publicised pledge to cut prices across a raft of branded goods. However, Tesco’s new year price cuts focused on 380 branded products, while the GPI examines prices across more than 21,000 lines.

Across all retailers, the biggest annual price falls were recorded in fresh and chilled. For once though, fruit & veg didn’t lead the way, with average prices falling by 2.9%. Instead, the biggest price cuts were seen in deli (4%), chilled (3.4%) and meat, fish & poultry (3.3%). Fruit & veg had previously been the biggest category faller every month since last March, peaking at -4.8% in the month to 1 July.

The January price cuts announced by a number of the supermarkets do not mean that the price of food has fallen since Christmas. Instead, the record level of deflation recorded by the GPI is a product of pre-Christmas discounted prices rising back up at a slower rate than they did last year.

Month-on-month the GPI recorded inflation of 1.09%, with all four of the supermarkets seeing a measure of post-Christmas price inflation.

The overall monthly inflation figures was primarily driven by alcoholic drinks coming off festive promotions – with average prices 5.42% up month-on-month.