What a Conservative-DUP coalition means for food and drink 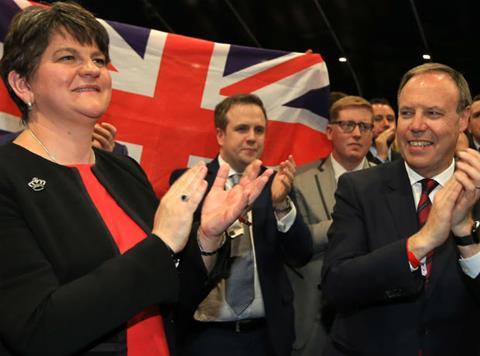 Uncertainty, political wrangling and resignation rumours. Less than a year after Britain was plunged into turmoil by the Brexit vote, today’s election result has evoked all-too-familiar feelings.

Theresa May’s hopes of an outright victory were dashed by winning just 318 seats – eight short of a majority – forcing her to from a coalition partnership with Northern Ireland’s Democratic Unionist Party. Although the party has only 10 seats, it could nevertheless influence Tory policy. So what will such a deal mean for the food and drink industry?

One of the DUP’s key policies is to maintain a “seamless, frictionless” border with the Republic of Ireland. Although the party has always been Euro-sceptic, it is concerned over Brexit’s potential impact on trade and travel. So establishing a free trade deal with the EU is high up on its wishlist. No doubt this will be a point of contention with the Conservatives, which set out a hard line on Brexit negotiations in its manifesto.

The DUP’s softer approach will undoubtedly gain the support of food and drink trade bodies, which urged the government to avoid a hard border with the Republic of Ireland in March. “A cliff-edge scenario that results in a sudden transformation to our trading arrangements with Ireland would be hugely damaging for our industry and for the wider economy on both sides of the border,” said a letter jointly signed by the FDF, BRC, NFU, British Poultry Council and British Meat Processors Association.

The DUP is a strong supporter of the Northern Ireland fishing industry. It names fishing as vital to local job creation and sustainable growth, and fought for Northern Ireland to have 10% of the total UK European Maritime and Fisheries Fund.

In particular, the party has been a long-time critic of the EU’s Common Fisheries Policy. Having set out plans to fight for the removal of “unwanted EU gold plating” in its 2016 manifesto, the party looks willing to fight hard in negotiating a new deal. And many Conservative MPs are of a similar mind. However, the new government will also have to take into account that 66% of the UK’s fishing exports go to the EU. In December 2016, the House of Lords EU Committee warned the UK may need to compromise on waters access to preserve tariff-free or low-tariff trade.

Describing itself as a “friend of the farmer and our natural heritage”, the DUP is keen to get the agricultural industry on side. The party claims credit for ensuring Northern Ireland was the first region of the UK to pay advance Common Agricultural Policy payments to farmers. Plus, it was a contributing force to the ‘Going for Growth’ strategic plan for the Northern Ireland agricultural industry, which set out vision for growing sales by 60% in time for 2020.

Similarly to the Conservatives, the party is keen on strengthening the export market. The DUP wants to establish a marketing body to promote food from Northern Ireland (building on the work started by the ‘Year of Food’ promotional initiative in 2016). Again, this will strengthen its desire for a free trade deal with the EU.