Time for the excuses about eggs to stop 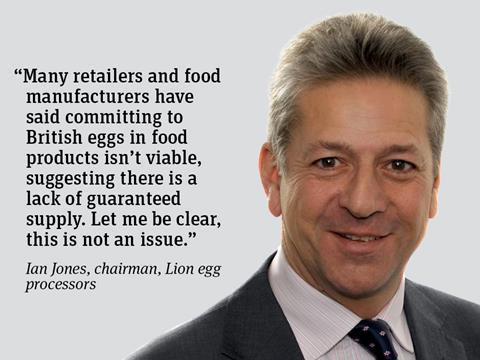 The fipronil scandal has brought ingredients into the public eye, and consumers don’t like what has been revealed, in particular the widespread use of imported eggs in food products. There are echoes of the horsemeat scandal, in so far as consumer trust in prepared food has taken a knock.

As an industry, we’ve been asking for retailers and manufacturers to use British eggs in prepared foods, as well as fresh egg supplies, and to include clear labelling on packs for as long as I can remember. We regularly cite food safety issues related to foreign eggs and egg products. Last year’s ACMSF report into egg safety also cited these issues, and research that shows consumers want British eggs to be used, or at least a chance to understand what they are buying when they pick up food products where egg is an ingredient.

We have regularly pointed to the gap in standards between the requirements British Lion egg processors follow, and those of egg processors outside of the UK.

Some companies specify British egg products within prepared food, but compared with 90% penetration of British Lion shell eggs into retail, the difference is stark.

Many retailers and food manufacturers have said that committing to British eggs in food products isn’t viable, suggesting there is a lack of guaranteed supply. Let me be clear, this is not an issue. All we need is a commitment from the retailer or food manufacturer. At present, egg is processed to meet demand. If demand increases so will production. We can look at allocating more eggs to processing, which can happen fairly quickly, and we can start expanding egg production by increasing the size of our laying flocks - a longer term job, but just as achievable.

With the uncertainty of Brexit on the horizon, and consumers clearly demanding British eggs, as well as country of origin labelling on prepared foods containing egg products, now is the time for retailers and food manufacturers to stop making excuses. We’re committed to offering the highest standards of food safety - we just need food manufacturers and retailers to work with us towards the same goal.