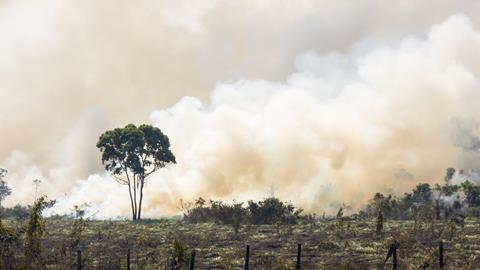 Can new UK laws put an end to illegal deforestation?

Defra is regulating to make sure companies do not use commodities produced on illegally deforested land. Do the measures add up?

British companies are intimately linked, albeit inadvertently, to illegal deforestation around the world. For years, they have adopted voluntary commitments to tackle the problem but, according to a recent Global Canopy report, are still often falling short. Forty per cent of the companies assessed do not have any deforestation commitments in place, while half of those that do fail to report on them.

The UK government is now stepping in as it launches its ‘green recovery’ from the pandemic. Last week, Defra introduced proposals that will make it illegal for businesses to use agri-food commodities produced on illegally deforested land and will mandate due diligence requirements in order to enforce it.

International food giants such as Nestlé and Tesco have previously backed regulation for enhanced due diligence, while another 26 companies including Unilever and Mondelez added to calls this week. So how might the UK’s law work in practice? And what impact could it have on businesses?

The ambition to tackle deforestation through legislation is one that many companies support and wish to engage with government on, says Helen Munday, chief scientific officer at the FDF, though the initial proposals “still leave a lot of questions to be answered”.

Perhaps one of the most important will be what exactly businesses are asked to do. While Defra insists the law will show illegally produced commodities “have no place in the UK market” by fining larger businesses who fail to comply, it is unclear exactly what that compliance will involve.

The options range from meeting basic due diligence requirements, through to only allowing products on the market that are proven to be deforestation-free, each of which could come with a unique set of implications and considerations.

Whichever path is chosen, Munday insists the testing economic background of Covid and Brexit means businesses must be given adequate time to adjust. “This will be quite an undertaking even for some of the biggest companies, so they need time to prepare for that,” she says.

Fortunately, neither businesses nor government will be launching completely into the unknown. Both the EU and the UK offer numerous precedents and clues as to what such a law will require in order to be successful. The Netherlands, for example, is set to introduce child labour due diligence requirements to obligate all companies in the supply chain to either conduct due diligence personally or acquire a certificate from suppliers that confirms it has taken place.

The EU Timber Regulation, meanwhile, which came into force in 2013, offers pointers on how punishments could be enacted for those in breach. Companies are typically fined less than €10,000 under the regulation and always for inadequate due diligence – although that sum may not be large enough to always act as an adequate deterrent, argues Duncan Brack, an independent policy analyst and advisor to the Global Resource Taskforce Initiative, upon which the government’s proposals are based.

“If you have the power to seize the products, that tends to have a much greater effect on the companies than just fines, which can be absorbed into the normal costs of doing business,” he says, though he concedes that seizures are “quite a drastic thing to do”.

Brack therefore suggests the UK introduce different levels of penalties for different levels of offence. If a company was found to knowingly put illegally produced palm oil on to the UK market, for example, that could warrant the highest level of punishment such as seizure. For inadequate due diligence, however, a fine may be more suitable.

According to the government, the punishments, whatever they may be, will only apply to larger businesses for the time being, for it is they who “have the influence to send a positive signal to producers”. The threshold for what constitutes a ‘large business’ is not yet specified but will likely mean the many thousands of SMEs within the UK’s food sector dodge the burden.

While this will be welcomed by many, a failure to include all businesses risks creating a loophole for smaller firms that operate within high-risk supply chains, says Clotilde Henriot, law and policy advisor at ClientEarth.

“We don’t want to have some companies fall out of the remit of the legislation even though they are selling [illegal] product that could end up in the market,” she says, arguing this could disrupt the flow of information through a supply chain and “fundamentally undermine the due diligence process”.

Instead, Henriot advocates different requirements depending on each company’s position in the supply chain.

A small retailer, for example, selling directly to consumers and not sourcing direct from origin, has little influence over the market and should therefore be tasked with a lesser burden than the likes of Unilever and Nestlé.

“all deforestation, not just deforestation deemed ‘illegal’ by the laws in the region of origin should be ruled out”

The size of the fines and the businesses to which they will apply are two of the key reasons the proposals are flawed, claims Rebecca Newsom, Greenpeace UK’s head of politics.

She adds that “all deforestation, not just deforestation deemed ‘illegal’ by the laws in the region of origin should be ruled out”.

With leaders such as Brazilian president Jair Bolsonaro publicly advocating for further deforestation of the Amazon, Greenpeace is by no means alone in its concerns that the UK’s law could leave many of the most destructive global practices unaddressed.

Ruth Chambers at Greener UK believes the government must also ensure it continues to address other countries’ domestic laws, even if they appear acceptable for now. “What if those laws change? What if they go backwards? What is the government going to do about it?” she asks.

Brack, while agreeing that judgement based on domestic laws is potentially flawed, warns imposing alternative criteria could hinder the UK as it enters into trade talks with the likes of Brazil and Indonesia.

“The UK risks the legislation being seen as an attempt to impose external standards on these countries of origin. The UK, having deforested land centuries ago, is now saying to places like Brazil ‘you can’t deforest your country even though you might want to in your economic development’. That’s obviously not a good position to be coming from if you’re trying to negotiate a whole lot of free trade agreements.”

It is one of the many issues the UK government will need to address as the legislation progresses, yet with great hopes and expectation riding on it, further criticism is inevitable. There is, and cannot be, any silver bullet for the global deforestation problem – it is going to take much more than a single law.

EU Timber Regulation (2013): Companies are banned from selling illegally logged timber in the EU and must carry out due diligence checks to ensure that is the case.

UK Modern Slavery Act (2015): Companies with a turnover above £36m must publish an annual statement outlining the steps taken to ensure slavery and human trafficking is not taking place in their supply chains.

EU Conflict Minerals Regulation (due Jan 2021): Importers of tin, tantalum, tungsten and gold, from all conflict-affected and high-risk regions, must meet due diligence obligations.

Netherlands child labour due diligence (due by 2022): Companies must determine whether child labour occurs in their supply chains and if so, introduce a plan of action for how it will be tackled.