Wonky produce: Brits not put off by ‘ugly’ fruit & veg 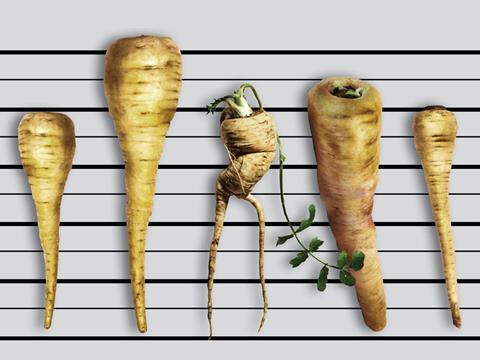 Consumers are not as bothered by ugly fruit and wonky veg as had previously been assumed, an “eye-opening” Asda trial has concluded.

As Morrisons was taken to task in Hugh Fearnley-Whittingstall’s War on Waste documentary on BBC1 this week over the strict specifications for its parsnips, Asda revealed it had relaxed standards and extended its ‘Wonky Fruit & Veg’ range four-months ago following a trial in five stores – later extended to 10 – that resulted in no impact on sales.

“We’re taking 340 more tonnes of standard and organic carrots and 300 tonnes of sweet potatoes that would previously have been out of spec,” said Ian Harrison, Asda’s produce technical director.

Asda’s research found 65% of shoppers would buy misshapen fruit and veg, with a further 56% stating they would be motivated to switch to less perfect produce to support farmers.

“It’s really been an eye-opener [to find] that customers will accept some defect – the sizes and shapes we wouldn’t normally use. We will definitely be looking at more,” Harrison added.

Supermarkets have set rigorous cosmetic specifications for fruit & veg for years as the received wisdom was that sales suffer and wastage is greater when shoppers are presented with less-than-perfect produce.

Amid outrage over the documentary’s exposure of 40% wastage levels on the parsnips supplied by Tattersett Farm, Morrisons denied that its standards were too strict, and claimed trials of wonky parsnips in the past had failed because they didn’t sell and too many went to waste.

Tristram Stuart, founder of food waste group Feedback, said there was “fairly robust evidence” that people were not put off by ugly produce.

Stuart pointed to several occasions when supply shortages had forced supermarkets to sell produce that would normally be rejected.

“No one even noticed” he said, adding that the supermarkets had admitted there was no decline in sales or increase in customer complaints.

In a major new report on how the industry should tackle waste published this week, Wrap said UK retailers should follow the lead of French retailer Intermarché, which celebrates and promotes ‘inglorious fruit and vegetables’ – misshapen produce that would normally be rejected by retailers.

But Feedback campaign & research co-ordinator Edd Colbert warned too much focus on ‘wonky’ veg could actually make matters worse. “Farmers tell us supermarkets are introducing specifications for wonky veg lines, such as insisting carrots have two legs or 30% curvature,” he said. “That can just add to overproduction because growers have to grow even more to ensure they can meet two rather extreme sets of standards.”

He insisted that to solve the food waste crisis, supermarkets needed to relax cosmetic standards around minor blemishes and variations in size. “It is not all about big wonky, crazy, charismatic fruit and veg. It is mostly about produce that to the common eye look totally fine, but might have some tiny blemish.”

Asda is allowing up to 15% of produce, including in class 1 bags and crates of loose fruit and veg, to be misshapen or superficially damaged.