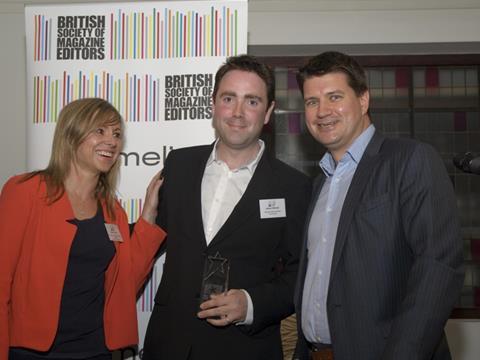 James Halliwell, The Grocer’s deputy features editor, won the Best Print Writer category at the BSME Rising Stars Awards this week - the only journalist from a B2B title to triumph at the awards event.

Halliwell beat off stiff competition for the award from writers at the Telegraph Magazine, Fabulous, Shortlist, Woman and Which? He was also shortlisted for Best Original Feature Idea (Print); while buying & supplying editor Julia Glotz was shortlisted for Best Web Writer.

The judges said Halliwell displayed “confident, lucid writing” that was “exhaustively researched and comprehensive in its scope, taking topical, relevant subjects and drilling down to dissect them in compelling detail”.

Halliwell was also named the PPA features writer of the year in 2013. With former fresh food colleague Richard Ford, Glotz won the Specialist Team at the BSME Rising Stars Awards 2013.