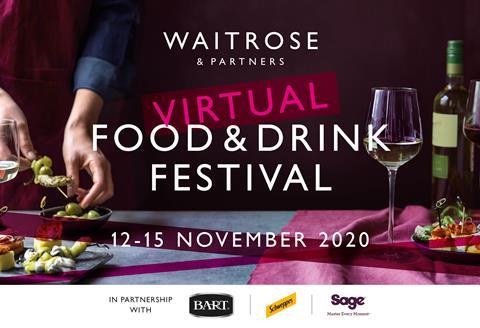 Waitrose has introduced its first-ever virtual food and drink festival made up of live cooking demonstrations and talks from the likes of Heston Blumenthal.

The event has been designed to replace the upmarket grocer’s annual drinks festival, which it is unable to host this year owing to the Covid-19 pandemic.

This year’s virtual festival, which will take place from 12-15 November, will feature cooking lessons from the Waitrose Cookery School, kitchen skills masterclasses with chefs including two Michelin-starred Nathan Outlaw and MasterChef winner Dhruv Baker, and Heston Blumenthal hosting talks on what inspires him. Attendees can also hear from Waitrose Weekend wine columnist and presenter Philip Schofield, as well as tastings, talks and demonstrations from suppliers and producers such as Bart Spices, José Cuervo and Tony’s Chocolonely.

It is made up of a total of 40 sessions, and its programme will be split into morning, afternoon and evening sessions.

“This event is unlike anything we’ve ever done before,” said Martin George, director of customer at Waitrose. “We’re thrilled to be offering customers the very best of Waitrose in a virtual celebration of food and drink.”