Omnichannel: ways for retailers to keep up with the digital revolution 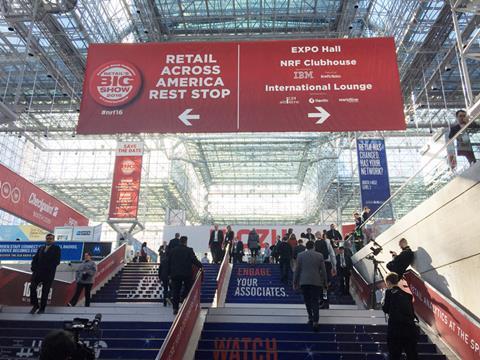 January in New York means one thing for retail: NRF, aka ‘Retail’s BIG Show’. It takes place downtown at the massive Jacob K Javits Center. More than 30,000 people swarm around the 580 stands that fill the 1.8 million sq ft building over four days. And they are all buzzing.

It’s chaotic, but in a good way. And that matches what’s going on in retail in 2016. One of the central themes to emerge from the show is that the digital retail revolution is getting faster, wilder and more unpredictable.

As John Lewis’ IT director Paul Coby says, these are “interesting times and no one knows what will happen. It’s the third industrial revolution and it is still accelerating, which is exciting but quite puzzling.”

The many tech companies at the show - headline sponsors include Oracle, IBM, Microsoft and SAP - claim to have the solution, in the form of software that enables retailers to tie up the myriad omnichannel strands - finally merging whichever path a consumer takes to purchase, offering them the same deal whether they are smartphone surfing, walking into a shop, or a combination.

“The journeys that relate to omnichannel scare the heck out of retailers,” says Jeff Warren, VP of retail strategy and solutions at Oracle. “It’s a lot of integration. They have to pull a lot of disparate journeys together. And historically the burden has been on retailers to do that. Our goal is to take on that burden.”

Warren says “20 of the top 20” grocers use Oracle software including Tesco, Morrisons and Sainsbury’s in the UK and Supervalu, Kroger and Carrefour in the US and Europe. And amid a blizzard of tech-talk, he identifies four “simple objectives” for successful retailing in multi-challenging multichannel 2016. “Identify customers, engage with them, convert them, nurture and reward them”.

All four are founding retail principles, but his point is that retailers have been so whipped up by the digital revolution that “boiling things back” to basics while using futuristic technology to enable that simplicity is the only way to manage. “Millennials live in a far different manner from previous generations in how they interact with a smartphone and the expectations they have,” he adds. “So let science do the heavy lifting.”

For instance, when it comes to nurturing and rewarding customers, Warren claims retailers using Oracle’s loyalty software can see a 5% increase in customer retention. That translates into a 75% increase in profitability because customers typically purchase 28% more, are 40% more likely to open promo emails and - crucially - 52% say they will buy more if recognised across multiple channels.

It’s results like these that inform why NCR UK MD Jon Stretton believes 2016 will see retailers start to take action. Not because they have only just cottoned on to the omnichannel trend, but because “any major retailer, whether grocer, department store or DIY chain, has extremely complex e-commerce systems that have evolved over a long time. That’s made adapting to rapidly changing consumer needs a challenge.”

That’s led tech firms to focus on ease of implementation as much as software. He says NCR, which works with Morrisons, made acquisitions to address this and “simplify the ability to change. It’s about making it easier for retail customers to experience omnichannel - whether it’s loyalty, enabling a basket to transcend from physical to mobile and back again, or to be able to target consumers across platforms”.

And so, after years of being a buzzword, he says “now we will see retailers mature their omnichannel proposition. And actually make it happen.”