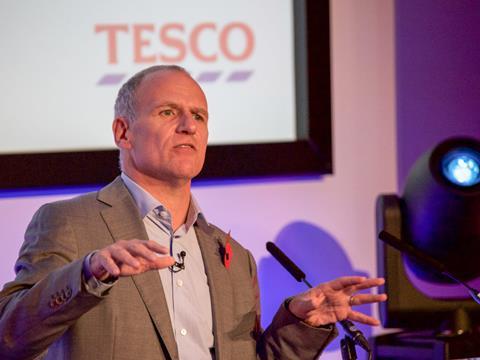 Tesco CEO Dave Lewis took home an annual pay package worth £4.6m last year – a figure slightly down from the £5.1m he received in the previous financial year.

Lewis’ basic pay remained stable at £1.25m with an additional £313k of pension payments and £61k of other benefits.

His annual bonus was reduced from a figure of £2.3m in 2017/18 to £1.6m last year, which represented 52.5% of the maximum payout relating to performance against a variety of criteria – primarily the supermarket’s sales growth and operating profit.

The value of long-term share awards rose to £1.3m from £1.2m, reflecting the vesting of shares awarded in 2015.

The awards last year brings Lewis’ total pay to more than £22.6m since joining Tesco in its 2014/15 financial year and spearheading its turnaround.