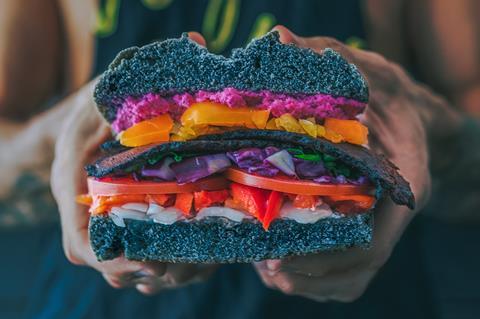 Can big business cash in on plant-based? by Ash O’Mahony

Vegans are an ethical bunch. As a group staunchly gunning for animal welfare, you’d imagine they’re not falling over themselves to hand over their cash to a company that sells largely animal-based products. Yet this summer saw KFC’s vegan Imposter burger launch and sell out in just three days. And Greggs attributes much of its profits boom this year to the popularity of its vegan sausage roll. This dilemma isn’t confined to the out-of-home arena with big brands launching vegan ranges. All of which begs the question: do plant-based consumers care if the food and drink they buy comes from a meat-based business? Are flexitarians less likely to care about the business behind the product than staunch vegans? And what does this mean for the potential of big businesses in plant-based?

The big boys: As one of the biggest trends to hit grocery in recent years, it’s no surprise a growing number of major grocery players are entering plant-based. Yet while they have superior marketing funds and grocery clout compared to start-ups, the fact remains that they are not entirely vegan operations. How much does this matter to Britain’s growing number of plant-based shoppers? And are these larger, non-vegan brands attracting non-vegan shoppers into the plant-based aisle?

Smaller start-ups: Who are the smaller vegan players making waves in plant-based, and is practising what they preach paying off in the supermarkets?

Soya: Soya has become controversial from a sustainability point of view. How much can soya’s 2% sales drop this year be attributed to rising consumer awareness of its environmental impact? Or is it more a case of increasing competition amongst milk alternatives on shelf?

New shoppers: The meat-free market increased its penetration this year. Who are these new shoppers entering the meat-free aisle, what is attracting them and what are they looking for?

Retail strategy: The amount of space given to plant-based varies dramatically across the major retailers. Who is pushing the plant-based movement furthest, and how have retailer’s own plant based ranges evolved this year?

4 x innovations: We identify four new products or product ranges that have not appeared in The Grocer before. including launch date, RSP and a picture of each.

Nielsen data: Using Nielsen date, we explain the performance of the top 10 brands.

Health and plant-based by Kevin White

Celebs and influencers are rushing to extol the health credentials of a vegan diet. So much so that plant-based has become synonymous with healthy in the eyes of many consumers. However, scrutiny is growing over the amount of salt and fat in plant-based products. Arguably, it shouldn’t be a problem. After all, many of these products high in salt and fat aren’t claiming to be healthy. But considering consumers have made that connection between health and plant-based, could it dampen growth in the category? And will consumers turn away from plant-based ‘junk food’?

Consumer attitudes: Why are so many consumers turning to plant-based products? How high up does health feature in the list of the reasons?

Marketing: How are plant-based brands and retailer offerings approaching the link between health and veganism? Is anyone seeing success from actively promoting health credentials?

Streetbees data: How do consumers feel about vegan products and health cues?