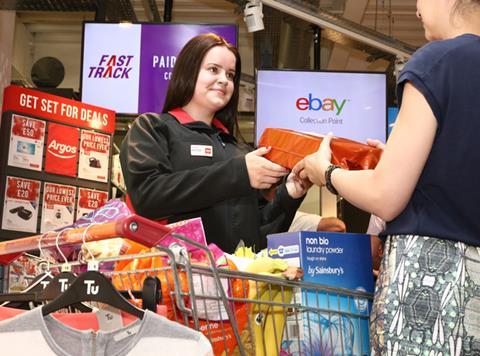 Consumer spending rose by 2.6% year-on-year in the festive period, though this represents a slowdown from a strong November according to Visa.

Visa’s UK Consumer Spending Index found that overall consumer spending in December slipped from the 3.1% increase seen in November but the festive period finished the strongest quarter of UK spending since 2014 with the average monthly spend up 2.8% year-on-year.

Spending in hotel, bars and restaurants was the star performer, up 7.3% year-on-year.

However – as illustrating by Next’s underwhelming Christmas update last week – the clothing and footwear sector suffered a 1.1% spending fall in December.

Much of the spending growth was seen away from the high street, with internet sales up 5.5% during the Christmas period.

“Online retailers enjoyed strong sales over the whole Christmas period, while bricks and mortar retailers saw an improvement after a disappointing dip in November, as consumers made a last minute dash for gifts on the high street,” said Kevin Jenkins, Visa’s managing director for the UK and Ireland.

“Growth was once again led by the experience sector, with consumers going to Christmas markets, travelling to visit loved ones or venturing to various parts of the country to celebrate.”

It has been a quiet start on the markets this morning to what is set to be a hectic week as we await a flood of festive trading announcements.

The only sector news of note in the City is that palm oil producer DekelOil Public Ltd has acquired a 100% interest in the Ayenouan palm oil project in Côte d’Ivoire after buying the remaining 14.25% stake it did not already own in the CS DekelOil Siva joint venture from Biopalm Energy.

The acquisition completes the process kicked off in May 2016 and will be financed by the issuing of new shares in the company to Biopalm, giving it a 12.5% stake in DekelOil.

Lincoln Moore, executive director of DekelOil, commented, “Today’s acquisition has been secured on terms that are value accretive for our existing shareholders. Equally as important however, is that it gives DekelOil 100% ownership of our producing and profitable palm oil project at Ayenouan. Our shareholders will also enjoy 100% of the benefits of all new initiatives going forward and I look forward to providing further updates on our progress in due course.”

On the markets this morning, the FTSE 100 is up yet another 0.2% to 7,225.6pts as the markets defy the slump in the pound after PM Theresa May’s comments over a “hard” Brexit yesterday.

This week the City

The Christmas trading updates begin to flood in this week on what is set to me a busy week in the City.

Morrisons (MRW) is set to kick off the festive period updates for the grocery sector tomorrow alongside Majestic wine (WINE), while takeaway firm Just Eat (JE) will issue a full-year update on the same day.

The Kantar and Nielsen grocery market share figures will be out first thing tomorrow to accompany the Sainsbury’s trading update, along with the monthly BRC-KPMG Retail Sales update for November.

The UK’s balance of trade import/export figures for the month are out on Wednesday after a big drop in the trading deficit was seen in November.