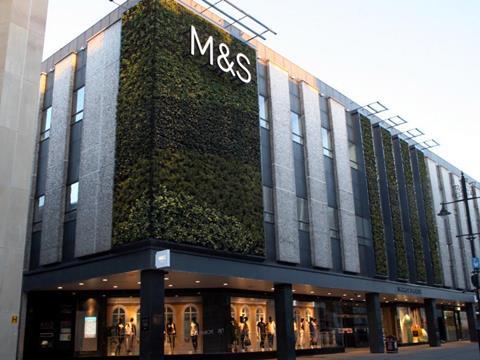 Marks & Spencer (MKS) boss Marc Bolland has this morning said that food sales at the retailer were ahead of the difficult and deflationary market in the fourth quarter. But most importantly, the CEO has stopped the rot in the general merchandise division, which had declined for 14 consecutive quarters. The clothing and home arm of M&S nudged like-for-like sales up by 0.7% in the three months to 28 March to beat analyst expectations of a 1.2% drop. It compared with a 5.8% fall in the previous quarter. The company said the reversal had been driven by “continued focus on product quality and styling”, with the spring/summer ranges being well received by customers.

Total food sales grew by 3.7% and by 0.7% on a like-for-like level as consumers flocked to the upmarket proposition for special occasions, with record Valentine’s Day sales registered.

“We have made strong progress over the quarter,” Bolland said. “In food we delivered another excellent performance, with sales growth ahead of the market. We continued to deliver on general merchandise gross margin, and are pleased that we have achieved this whilst also improving general merchandise sales. M&S.com has returned to growth, as planned, with further improvement in customer metrics.”

However, macro-economic issues, particularly in the Russia, Ukraine and Turkey franchise partnerships, coupled with further weakening in the euro, significantly hit the retailer’s international second half profit with sales around the world down 3.8%.

Online sales at M&S.com returned to growth – up 13.8% – with traffic, conversion and customer satisfaction continuing to improve, the group added. The new distribution centre at Castle Donington, where M&S had invested £150m last year, performed well during the quarter putting the teething problems which plagued it in Q3 behind it.

Tate & Lyle (TATE) said its adjusted operating profit has been held back in the year ended 31 March as expected as the group suffered operational and supply chain issues in the first half and battled in an “extremely competitive market” for its Splenda brand.

In a pre-close trading update the sugar giant added that based on the performance for the fourth quarter there was no change from the guidance. Adjusted profit before tax is expected to be modestly below the range stated in September 2014 of £230m to £245m.

However, Tate did say the launch of its low calorie sugar Dolcia Prima had registered “encouraging early interest and engagement” from customers. But given the relatively long development and adoption cycles for new ingredients, the group did not expect it to have any material effect on performance during the next financial year.

Booker (BOK) chairman Richard Rose is stepping down after nine years of leading the board at the wholesaler. He will leave on 8 July at the group’s annual general meeting, with the process to replace him already underway. Joining Rose is Mark Aylwin, the managing director of Booker Direct, who is leaving to “pursue other opportunities”. Aylwin will not be replaced as the group will embed Booker Direct into its retail structure. It comes as Booker reports its fourth quarter trading numbers for the 12 weeks to 27 March, with total sales, including Makro, up 1% on a year ago. Like-for-like total sales were also 1.7% higher, with non-tobacco like-for-likes up 2.3%.

Drinks group Diageo (DGE) has taken control of United National Breweries (UNB) after acquiring the remaining 50% interest which it did not already own for an initial $22m (£14.8m). In January 2013, the group On 28 January 2013, Diageo announced it had entered into an agreement to buy a 50% interest in the company which owns UNB’s traditional sorghum beer business in South Africa, with the remaining stake being held by Pestello Investments Inc, a company affiliated to Dr Vijay Mallya.

“Once completed, this transaction will give Diageo control of the leading traditional sorghum beer business in South Africa, including the ability to make investment decisions to support the continued growth of United National Breweries’ brands in the sorghum beer category,” the group said.

Elsewhere, Real Good Food’s stock has bounced back slightly so far this morning following yesterday’s (see below) 10% fall. It is up 5.6% to 38p.

Real Good Food (RGD) had a horror show yesterday when its shares crashed by 10.1% to 37.8p – although they were down more than 20% in the morning – after it issued a profit warning. The group also said it was in discussions to sell its troubled sugar business Napier Brown, which includes the Whitworths brand. It warned that low EU sugar prices were continuing to make trading difficult for its Napier Brown and Garrett Ingredients subsidiaries. Real Good added Napier Brown had returned to profit following a “very poor first half” but remained behind expectations for the year, which would result in earnings falling “significantly” behind current market expectations.

Online grocer Ocado (OCDO) fell back after big gains earlier this week. The volatile stock closed the day 4.1% down back to 339.4p.

Thorntons (THT), another stock which has been on somewhat of a rollercoaster of late, also fell by 4.2% to 68p. And Booker (BOK) saw its shares decrease 2.3% to 142.4p ahead of this morning’s trading update.

At the opposite end of the table, premium mixer brand Fever-tree (FEVR) made gains of 3.6% to 256.8p. The stock is up almost 19% since it reported last week that its sales and profits had jumped by about 50% in its first year as a listed company.

The FTSE 100 bounced back as well to end the day 0.5% up to 6,807.8 points as the latest UK manufacturing data showed the sector grew at the fastest pace in eight months.