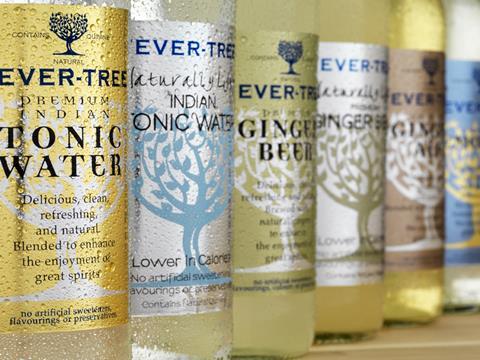 Sales and earnings at Fever-Tree (FEVR) have soared by close to 50% in the carbonated mixer brand’s first full-year as a listed company. It is cashing in on the growing consumer appetite for premium spirits as shoppers look to match their drinks with similarly upmarket mixers. The company also, more recently, benefitted from Tesco’s falling out with Coca-Cola, with less Schweppes on the shelves meaning an uptick in sales for Fever-Tree, its CEO told The Grocer earlier this month.

Although high growth was achieved in all the regions where the company operates, its two largest single territories – the UK and the US, registered huge gains, up 60% and 59% respectively. This growth continued to be underpinned by “strong stable margins”, the group said.

“We are confident that we will continue to be able to grow and lead in this premium segment, which we believe will outperform other drinks categories for some time to come as the natural ratio between premium spirits and premium mixers equilibrates.”

CEO Tim Warrillow said: “2014 was a notable year for Fever-Tree as we continued to strengthen our market share and reputation as the leading international premium mixer brand. We achieved a 49% increase in revenue and 48% increase in adjusted EBITDA. “Encouragingly, growth came from all four of our international regions, illustrating the global appeal of the brand and was underpinned by strong margins and high cash conversion rates. We look forward to the year ahead with confidence.”

Positive half-year results for listed supplier Finsbury Food Group (FIF) sent the group’s stock soaring this morning, up 4.3% to 72.5p. The speciality bakery manufacturer of cake, bread and morning goods for the retail and foodservice channels has reported a 24.1% jump in sales to £107.6m in the six months to 27 December, which included two months of trading from the newly acquired Fletchers Group. Stripping out new activity, sales were up 5.6% on a like-for-like basis. Operating profit was up 74% to £4.5m in the period and pre-tax profit almost doubled from £2.1m for the comparable half of 2013 to £4.1m.

“I am pleased to report the significant progress of the group,” CEO John Duffy said. “Over the period we have seen a strategic shift, becoming more diversified in terms of products and customers, as well as evolving into one of the largest speciality bakery groups in the UK.

“We have seen notable growth, both organically and through the Fletchers acquisition, which is integrating well. We look forward to the remainder of the year with confidence and, despite a tough trading environment, we believe the group is in a strong position to deliver on our growth strategy.”

The fate of Müller’s £80m acquisition of Dairy Crest’s dairies operations is back in the hands of the UK’s Competition and Markets Authority.

The European Commission, which has been scrutinising the deal, has referred it back to the UK watchdog for further review. Dairy Crest this morning described the talks with the EC as “constructive”.

CEO Mark Allen added: “This transaction will be a positive development for both Dairy Crest and the UK dairy industry as a whole, delivering economies of scale that will help to create a more sustainable UK dairy sector that is better placed to compete on the global stage.

“It has always been our preference for the transaction to be reviewed in the UK, so we welcome this referral back to the CMA as a positive step. We will work with Müller and the CMA to progress the merger review as quickly as possible.”

Dairy Crest announced it had agreed to sell the assets of its dairies operations to Müller UK & Ireland Group back in November. The already has the approval of Dairy Crest shareholders.

UK food and non-alcoholic drink exports grew by 2.6% in 2014, almost doubling in value over the past ten years, with exports of UK dairy at a record high, according to a report from the Food and Drink Federation (FDF). Food and non-alcoholic drink exports continued growing to non-EU countries, up 9% on 2013, with double-digit growth in the US and China. It meant exports have almost doubled in value over the past decade, up from £6.5bn in 2004 to £12.8bn in 2014. The top three product categories last year for exports to the EU were salmon, chocolate and cheese.

“This performance shows that British food and drink is in demand across the globe – a testament to our quality brands and innovative products,” said Steve Barnes, economic and commercial services director at the FDF.

“Food and drink is bucking the trend when it comes to exports and this is great news for the UK economy. High demand from international markets for our food and drink must be at the heart of the country’s strategy for economic growth and we look forward to working with the Government to capitalise on this opportunity.”

Car parts and bike chain Halfords has named its replacement for Tesco bound CEO Matt Davies this morning. Jill McDonald, who is currently in charge of the McDonald’s chain of restaurants in the UK, will take over as chief executive on 11 May. She began her career in 1987 at Colgate Palmolive in brand management and joined British Airways in 1990 before moving to McDonald’s in 2006 as chief marketing officer UK & Northern Europe. McDonald was appointed to her current role of UK CEO and president of the North West division in Europe in 2010.