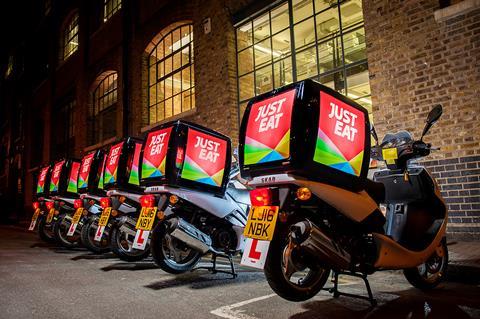 Dutch food delivery giant Takeaway.com has increased the “certainty” of its all-share combination with Just Eat (JE) by implementing the merger by way of an offer.

The two delivery businesses agreed a £9bn merger, originally to be delivered by means of a scheme of arrangement, set to create “one of the largest online food delivery companies in the world” in August.

However at the end of October, South African investment firm Prosus made a 710p per share cash offer for Just Eat, which was rejected the same day, sparking a bidding war for the FTSE 100 takeaway business.

To ensure the deal goes through, Takeaway.com “will implement the combination by way of a recommended offer” it said.

The Dutch business urged Just Eat shareholders not to take any further action in relation to the Prosus offer as the combination between Takeaway and Just Eat “has compelling strategic logic and attractive opportunity to build on their strong individual platforms”.

In response to today’s announcement, the board of Just Eat recommended unanimously that shareholders accept the Takeaway.com offer.

Takeaway.com CEO Jitse Groen said: “We believe that the Just Eat Takeaway.com combination offers its shareholders a future value far superior to both Just Eat and Takeaway.com separately, and to the recent cash offer made by Prosus in particular.

“With this switch, we provide additional deal certainty to the Just Eat shareholders.”

The offer will be conditional on the acceptance by at least 75% of Just Eat shareholders.

In what is posed to be a busy week for the UK grocery sector, with updates from Morrisons, Sainsbury’s and Associated British Foods, analysts will especially keep a close eye on Marks & Spencer’s interim results, set to be announced on Wednesday.

This will be the first financial update since M&S’s first-ever relegation from London’s blue-chip index in September, after its shares plunged to a decade-long low as investors feared further profit downgrades and expressed scepticism over the purchase of a 50% stake in Ocado’s food delivery business – a £750m deal funded by a dividend cut and a discounted rights issue at 185p per share.

Analysts will pay close attention to the retailer’s sales trends in both the Food and Clothing & Home divisions, since both “have been stuck in reverse gear for some time”, AJ Bell investment director Russ Mould said.

Mould noted that like-for-like Food sales have been falling for nine quarters in a row, with the Clothing & Home unit equalling the “grim run”. The last time M&S reported a sales increase from its clothing line was 2011.

In this latest set of results, analysts expect like-for-like food sales to rise 0.3%, returning to growth after over two years, but sales of its clothing and furniture lines are predicted down 4.3%.

However, the high street bellwether’s performance has not always been so gloomy.

In an attempt to restore profitability, M&S has embarked on a “major restructuring plan”, including several store and line closures.

However, the latest updates on the chain’s turnaround efforts marked for little optimism as CEO Steve Rowe last month admitted being 18 months behind schedule with the execution of plans to improve efficiency in M&S’s Clothing unit.

Rowe renewed promises to reduce the number of products by around 10%. However, these were described as ‘whack-a-mole’ promises by disappointed analysts and shareholders.

To attract younger consumers to its stores, M&S has also announced it will allow customers to pay for online purchases up to £800 in interest-free instalments, adopting an increasingly popular strategy already in use at rivals H&M and ASOS.

The move was hailed as “the latest step in M&S’s far-reaching transformation, becoming more relevant to customers with widespread change across the business”.

Whether these initiatives will prove successful is yet to be seen.

Meanwhile, with the chain expecting store closures to knock 1% off its Food sales and 3% off Clothing & Home revenues for the full-year, it appears trouble is still on the menu at M&S, with analysts and investors expected to keep an eye out for any forecast changes, Mould concluded.

This sale was “in line” with plans to reduce the company’s debt through the disposal of certain non-core assets, Marston’s said, with the pubs to be sold being “smaller wet-led leased, tenanted and franchised pubs”.

The deal is expected to complete before the end of the month.

The pubs being disposed of generated £4.8m of EBITDA and £3.7m in operating profits for the year ended 28 September 2019.

“We are making good progress with our plans to reduce our net debt by £200 million by 2023 in part through the disposal of non-core assets,” CEO Ralph Findlay said.

“We are encouraged by the level of market interest that this portfolio of pubs has attracted. This further underpins our confidence in achieving the accelerated £70 million disposal proceeds target that we have set ourselves for the current year.”

It is set to be a busy week in the City with Primark-owner Associated British Foods (ABF) and tobacco giant Imperial Brands (IMB) releasing full-year results on Tuesday.

On the same day, Morrisons (MRW) will update on its third quarter performance while internationally HelloFresh will release Q3 results.

On Wednesday, Marks & Spencer’s (MKS) much anticipated half-year results are out, as well as third quarter updates from Ahold Delhaize and Kerry Group (KYGA) and first quarter results from US food group Hain Celestial.