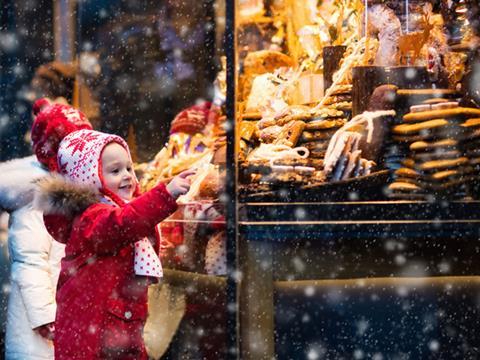 “Christmas gloom settles on the high street”, writes The Times (£) stating: “High street retailers will have little to celebrate this Christmas if dismal recent trends continue and the latest forecasts are right.”

The crisis on Britain’s high streets is to intensify this Christmas, with shopkeepers preparing themselves for the quietest festive period since the credit crunch (The Guardian). Britain’s High Street faces a bleak Christmas amid warnings that heavy discounting is failing to lure shoppers away from the internet (The Daily Mail). The number of people out shopping in the UK in November dropped to its lowest level since the 2008 recession (The BBC).

“The nightmare before Christmas strikes the high street”, says The Sunday Times in a separate article on the state of UK Retail. “A toxic cocktail of Brexit-induced consumer jitters, a mild autumn and rampant online competition has left struggling chains fearing the end is nigh,” it says. (The Times £)

Three Lincolnshire farmers due to share more than £20 million after their crisps company was bought by Pepsico might have to wait a little longer for pay day. The Competition and Markets Authority said yesterday that it was investigating whether Pepsico’s acquisition of Pipers Crisps would lead to a “substantial lessening of competition” in the UK. (The Times £)

The collapse of another high-profile fraud trial — with two former Tesco executives acquitted in a £250m case last week — is the latest setback for Britain’s Serious Fraud Office, writes The FT. It suggests the UK should lower the burden of proof in corporate fraud cases and move to a “failure to prevent” principle. (The Financial Times £)

Profits at Luke Johnson’s artisan bakery were nearly wiped out last year, delivering another blow to the embattled entrepreneur as he fights to fix the mess at his Patisserie Valerie chain. The parent company of Gail’s Bakery, chaired by Johnson, saw profits tumble to just £142,000 in the year to February 2018, down from £2 million the year before. (The Daily Mail)

Amazon is planning to open one of its high-tech till-free supermarkets in London’s West End, it has been claimed. The Amazon Go stores allow customers to pick up their shopping and leave without having to go through a checkout, by charging them automatically through their phones. (The Daily Mail)

Pizza Express is under mounting pressure from debts, rising costs and fierce competition, credit ratings agency Moody’s warned as it downgraded the restaurant chain. (The Telegraph)

Disgruntled franchisees have written to the board of Domino’s Pizza threatening to “declare war” on the fast-food chain if they are not handed a greater share of company profits. (The Times £)

The FT interviews Starbucks’ boss Kevin Johnson on how the coffee chain chief is building a robust company that can outlast any leader. (The Financial Times £)

The world’s first crop of bananas grown without soil is due to be harvested this week, part of an effort to stem the spread of a deadly fungus that threatens the future of the fruit (The Financial Times £).