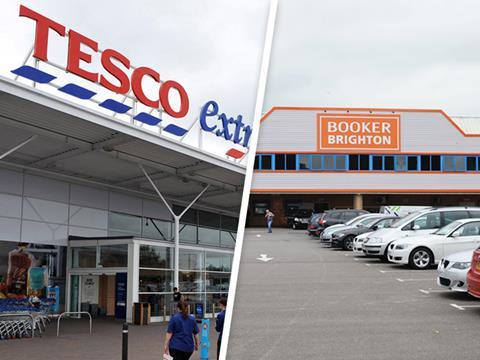 The boss of Bestway, the UK’s largest cash and carry group, has raised fresh doubts about Tesco’s £3.7bn merger with Booker by highlighting that the latter’s corner shop owners are obligated to buy two thirds of their produce from the wholesaler. Martin Race, Bestway’s managing director, said there were “buy-out agreements which limit the amount a shop can buy from other wholesalers”. As a result he said Booker had “an obvious level of influence” over its network of 5,000 independent shop owners. (The Telegraph)

The intervention came after Dave Lewis, chief executive of Tesco, said that the owners of corner shops with franchise agreements with Booker “have the freedom to shop around” and buy from other wholesalers (The Times £).

Tesco will see the business rates bill for its biggest stores fall by £105m over the next five years, highlighting another anomaly created by the controversial tax (The Guardian). New figures from business rates specialists CVS show that the Government’s revaluation will see Tesco’s bill for its largest stores in England and Wales fall by £13m this year, from £450m to £437m (Sky News).

UK cereal firm Weetabix is to be bought by US firm Post Holdings for $1.8bn (£1.4bn), its owner has confirmed (The BBC). Bright Food had been hoping to fetch £1.5bn for the 84 year old business, but industry experts said that the sale process had been “challenging” (The Telegraph). The deal between Weetabix and the US group, which owns cereals brands including Golden Crisp and Cocoa Pebbles, marks the latest in a wave of foreign takeovers of British companies after the UK voted to leave the EU in June last year (The Financial Times £)

The former owners of Bernard Matthews “lined their own pockets” by rejecting a takeover offer that would have protected the turkey producer’s pension scheme in favour of an insolvency process that ensured a greater return for themselves, MPs have claimed (The Guardian)

The Guardian writes that the move from Unilever to put its spreads division up for sale raises fundamental questions about the identity of Unilever, which was formed in 1929 by a merger between Merseyside soap makers Lever Brothers, and Margarine Unie, a Netherlands-based collection of margarine makers. “Without spreads, can it still be Unilever?”. (The Guardian)

Retailers and restaurants have enjoyed an Easter bounce as consumers splashed out more over the weekend than last year, driven by the rise of online shopping and casual dining. (The Telegraph)

BrewDog’s new American investor has said it is on the hunt for more consumer brands after splashing more than £200m on a stake in the brewer. TSG Consumer Partners has only recently crossed the Atlantic. Its first investment being in Germany’s Canyon Bicycles in 2016, with crowd-funded BrewDog its second European foray. (The Telegraph)

One of BrewDog’s early backers has seen his initial £240,000 investment transform into a stake worth more than £30m thanks to the brewer’s new fundraising, which valued the business at £1bn (The Times £)

The Co-op has attracted 750,000 new members in the past six months by offering a 5 per cent cash back reward on purchases of own-brand products and a 1 per cent donation to local charities. (The Times £)

The FT’s Lex column suggests AG Barr needs to diversify even as it cuts back on sugar levels. It writes: “A £30m buyback programme would be better spent building on this success. Without it, Barr will struggle to inject sparkle into its sales even as it removes the dulcitude from its drinks.” (The Financial Times £)

The number of distilleries in the UK rose by a sixth last year, thanks to the growing preference for gin and whisky made by “craft” producers rather than established corporations. (The Financial Times £) A surge in British gin and whisky drinking has led to the number of new distilleries increasing by almost a fifth last year. According to HM Revenue & Customs 45 new distilleries opened, an increase of 17 per cent, and gin sales exceeded £1 billion (The Times £). The number of “boutique” distillers is pushing big brands off the shelf, as artisan drinks brands continue to take market share from the global giants, said accountancy group UHY Hacker Young (The Guardian)

The rapid growth of the UK wine industry looks set to continue, with wine makers on track to plant one million vines this year. The new vines, covering an estimated 625 acres, will yield another two million bottles of mainly sparkling wine, worth an estimated £50 million (The Times £). British wine producers will plant a record 1m vines over the next 12 months, allowing growers to produce 2m more bottles of wine a year in the south of a country not historically known for its viticulture (The Guardian).

Pizza Hut’s British business could be gobbled up for £100m after drawing takeover interest from an American investment fund. Pricoa, a debt investor owned by the American insurer Prudential Financial, is in advanced discussions to buy the 260-strong chain (The Times £).

A group of 110 former BHS workers are to share £1million compensation after a tribunal fight over their dismissal when the department chain collapsed. The staff from the retailer’s head office in London have been awarded up to 90 days’ wages following an employment tribunal. (The Daily Mail)

Mondelez, the global company that bought Cadbury in 2010, has invested £75 million in the West Midlands factory to make it competitive on the chocolate market (The Times £). Cadbury has hailed a £75million investment at its Bournville factory as crucial to securing the future of the chocolate in its historic home (The Daily Mail).