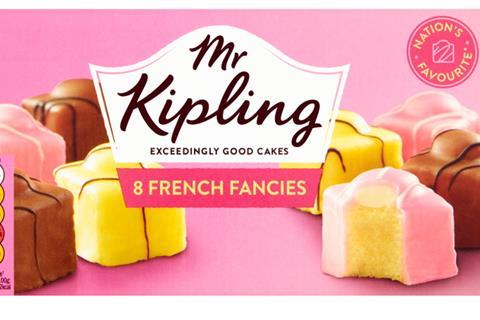 Premier Foods said inflation was making more people eat at home and use its Homepride and Sharwood’s cooking sauces, providing a further boost after the UK company prospered in the pandemic (The Financial Times £).

The maker of Mr Kipling cakes and Bisto gravy has said it will have to raise its prices as the costs of wheat, dairy and energy soar (The Times £).

The company behind Angel Delight and Loyd Grossman sauces was the top riser on the FTSE 350 on Wednesday after its profits came in ahead of expectations (The Mail). Premier Foods shares climbed 10.1% to 117.4p as the firm proposed a 1.2p dividend per share payout, a 20% increase on last year when the food manufacturer awarded its first dividend in 13 years.

UK inflation hit 9% in April, its highest level in more than 40 years, after soaring gas and electricity bills intensified the cost of living crisis facing households (The Financial Times £).

Inflation hit a 40-year high last month, driven by the jump in electricity and gas prices as the higher energy price cap came into effect (The Times £).

The escalating cost of food and transport also contributed to the rising cost of living, deepening the crisis affecting millions of low- and middle-income families (The Guardian).

The Financial Times (£) examines why Britain has the highest inflation in the G7. “The UK is grappling with soaring energy prices and a red-hot labour market — and the problems could persist.”

Britain’s biggest dairy producer has admitted the price of milk will continue to increase due to sky-high energy costs that have already risen by 200%. Arla Foods chief commercial officer Peter Giortz-Carlson told Sky News that input costs, driven higher by the war in Ukraine, will have to be passed on to customers.

The market report in The Times (£) looks at Ocado as the stock falls further away from the heady days of 2020, down 9.1% yesterday to their cheapest level in five years. “The latest drop came amid news that consumer prices inflation had risen to a 40-year high of 9% last month and the decision by Peel Hunt to slash its target price on Ocado shares by more than half.”

One of Ukraine’s largest farming groups has called for an urgent solution to unblock the country’s Black Sea ports as exports of grain, sunflower and rapeseed are being held up by the Russian naval blockade, driving inflation and shortages around the world (The Guardian).

The United Nations has warned that the war in Ukraine has helped to stoke a global food crisis that could last years if it goes unchecked, as the World Bank announced an additional $12bn in funding to mitigate its “devastating effects” (The Guardian).

Impossible Foods expects its “bleeding” meat-free burger to hit British supermarket shelves within a year as it awaits regulatory approval (The Times £).

Marks & Spencer has written to the chancellor warning that an online sales tax would damage the High Street (BBC News).

Two of the UK’s largest pub groups have warned that cost pressures are a “major challenge” to the industry and have forced them to axe discounts, reduce energy use and simplify their menus (The Financial Times £).

Mitchells & Butlers warned investors that cost headwinds presented “a significant challenge to the industry”, while Marston’s said that it was moving away from the value food market, scrapping its Two for One brand (The Times £).

The bleak view from O’Neills operator Mitchells & Butlers and Marston’s highlights the challenges facing the hospitality sector as prices of raw materials surge and consumers limit spending due to slow wage growth and rising costs (The Mail).

The boss of Marston’s has described the British pub as “the home of affordable socialising” and expressed confidence that the sector will come through the inflation crisis intact (The Times £).

Mitchells & Butlers, whose brands include Harvester and All Bar One, said that it expected its £1.8bn cost base to rise by about 11.5% this year and by a further 6% next year, although “high volatility in energy markets” could push that figure even higher (The Times £).

George Monbiot argues in The Guardian that our food system is about to collapse. “Massive food producers hold too much power – and the regulators scarcely understand what is happening.”

Obese adults in Britain will outnumber those who are a healthy weight within five years without “drastic government action”, a report has warned (The Times £).

The Times (£) carries an interview with Pret and Itsu founder Julian Metcalfe about his new plans for lunch.

Target shares plunged after the retailer said its profits had halved in the first quarter, hurt by high freight costs and supply chain disruptions, and warned of a full-year margin hit (The Financial Times £).

US president Joe Biden has invoked Korean war-era powers to boost production of baby formula in an effort to ease shortages that are becoming a political liability for the White House and congressional Democrats (The Financial Times £).