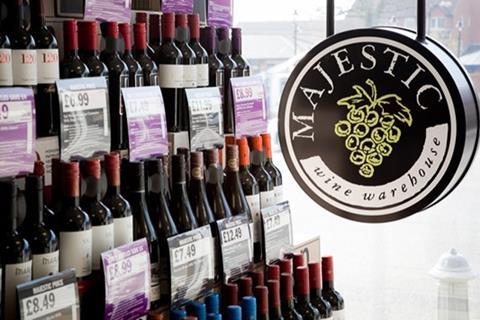 Majestic was sold off earlier this year, turning Naked in a purely online business

Naked Wines founder and CEO Rowan Gormley shocked investors by announcing he will leave the business early next year – months after the £95m sales of retail arm Majestic Wine (The Financial Times £). Gormley – who denied going to another job - will be succeeded by COO Nick Devlin (The Times £).

Gormely is famous in the industry for dividing opinions with some describing him as “a mere marketer who knows very little about wine” and others as a “brilliant businessman” argues the Telegraph. After his departure, a volatile performance of Naked shares implied the divide continued in the mind of investors. His decision to sell Majestic has also generated conflicting views, he sold the only profitable part of the business transforming Naked into an online-only player at time when Amazon prepares to get into bricks and mortar (The Telegraph).

Ocado has been given a provisional green light by the UK Competition and Markets Authority to stop calling itself a grocer after it sold its retail business to Marks & Spencer. The decision will effectively transform Ocado into a technology company competing with the likes of Amazon (The Telegraph).

The number of cigarettes imported to the UK has fallen by nearly half over the past decade signalling that the decline in smokers numbers has continued. Volumes of duty-paid cigarettes dropped to 24.5bn sticks in the year to September end, down 47% from 46.1bn in the comparative period 10 years ago. Cigar imports fell by the same percentage but hand-rolled tobacco grew 17% to 6.5m kilos (The Times £).

Meanshile, British American Tobacco shares soared on Thursday after the US government reversed plans, first introduced in 2017, to slash cigarette nicotine levels to a “non-addictive” amount. Rival Imperial Brands was in the red despite the positive news after analysts at JP Morgan lowered the business’ price target to £17.55 per share (The Times £).

Tesco, Sainsbury’s and Asda have recalled own-label versions of their heartburn and indigestion drug Zantac over contamination fears with a cancer-causing chemical (The Daily Mail).

JD Wetherspoon chairman Tim Martin has won the support of shareholders who re-elected him after 40 years in the role (The Financial Times £, The Guardian). Martin hailed “victory for common sense against the box tickers” after his re-election which was hardly fought by proxy advisors (The Telegraph, The Times).

Johnson & Johnson has lost a long-running class action lawsuit in Australia over vaginal mesh implants. Over 1,350 women claimed the company failed to warn them about the potential risks posed by the products, used to treat pelvic organ prolapse and incontinence after childbirth. The case is one of several lawsuits J&J faces over the products (BBC).

US department store giant Macy’s has issued its third profit warning of the year after barely breaking even in the third quarter. The news comes as a dark update for US shopping centres as they prepare to enter the all-important Christmas run-up (The Financial Times £).

However, a positive third-quarter performance from US retail behemoth Target seems to suggest not all is lost in the consumer sector across the pond. Target increased its profit forecast for 2019 after same-store sales rose 4.5% in the three months to 2 November (The Financial Times £).

Chinese e-commerce group Alibaba is on track to raise £10bn through a secondary listing in Hong Kong (The Guardian).