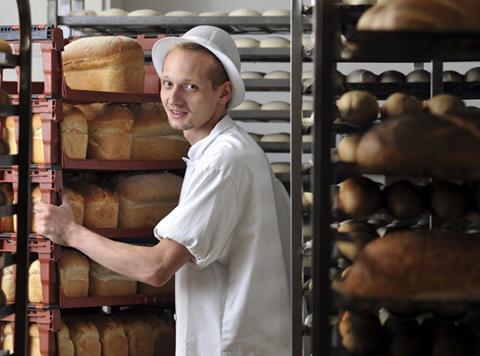 More than 1,800 jobs are set to go in Tesco’s bakeries after a slump in sales of traditional loaves of bread as customers turn to bagels and flatbreads (The Times £). Tesco has unveiled steep cuts to in-store bakeries as shoppers shun the loaf in favour of wraps, bagels and flatbreads (The Telegraph). More than 1,800 jobs are at risk at Tesco, after the retailer said it would cut staff at its large in-store bakeries to adapt to changing consumer tastes (The Guardian).

Tesco announced it will change its bakery space and range from May to meet changing demand - including less fresh bread baking from scratch in-store - and up to 1,816 workers could lose their jobs (The Daily Mail). The supermarket chain said no bakery counters would close but hundreds of its stores would reduce the amount of baking done on site (Sky News). The retailer said it would convert 58 of its bakeries so they will only finish pre-baked products on-site (The BBC).

Large farms will bear the brunt of subsidy cuts next year under the government’s post-Brexit plans set out on Tuesday for overhauling billions of pounds of financial support for agriculture. Under a tiered system of reductions over seven years, farmers in England will face a 5% cut next year to payments below £30,000, with stepped increases in the level of reductions on higher subsidies up to 25%. (The Financial Times £)

Farmers have hit back at suggestions the government will allow imports of chlorinated chicken and other low-standard farm produce in trade talks with the US, escalating the row over post-Brexit food standards (The Guardian). Farming leaders have said it would be “insane” to sign a trade deal that allows the import of food that would be illegal to produce in the UK, such as chlorinated chicken (The BBC).

Amazon opened its largest checkout-free grocery shop yesterday and is reported to be trying to sell the technology to other retailers (The Times £). Amazon has opened its first cashier-less supermarket, in a significant step forward in its strategy to expand and evolve its brick-and-mortar presence this year (The Financial Times £).

Premium chocolatier Hotel Chocolat once again bucked the wider decline on the High Street with double-digit sales growth and rising profits as it continued to open stores at home and abroad (The Daily Mail). Hotel Chocolat has seen a boost in half-year profits as the wider high street continues its slump (Sky News).

The co-founder of Hotel Chocolat has demanded the Chancellor shake up the ‘crazy’ business rates system. Angus Thirlwell said ‘a handful’ of the 125 UK retailer’s stores face a higher bill for the tax on property, than they for their rents. (The Daily Mail)

Retail sales have edged up by less than expected in February, according to the CBI, dismissing hopes that the high street would benefit from a post-election bounce (The Times £). However, The Telegraph claims that, in the latest sign of a so-called “Boris bounce” following the Tory general election victory in December, confidence has surged among beleagured shopkeepers according to a survey by the Confederation of British Industry. (The Telegraph)

Global investment in agricultural and food technology fell almost 5% in 2019, as funding for food delivery services declined sharply amid a wider pullback in the venture capital industry. (The Financial Times £)

Hammerson, one of the UK’s biggest shopping centre owners, will cut its 2020 dividend by almost half as it refocuses its business away from retail parks in a reflection of the dire state of the sector in the UK (The Financial Times £). Hammerson, the owner of Birmingham’s shopping centre Bullring, has warned it will slash its 2020 dividend as the collapse of a raft of retailers has dented its rental income (The Daily Mail).

The owner of the Bullring shopping centre in Birmingham and Brent Cross in London has had more than £800m wiped off the value of its portfolio as retailers go bust or close shops and renegotiate rents (The Times £).

The long-serving chief executive of British Land, the UK’s second-biggest listed property company, is preparing to step down after more than a decade at the helm. (Sky News)

The executive in charge of Uber’s Eats business, which is under immense pressure to cut costs, is leaving the company. (The Financial Times £)