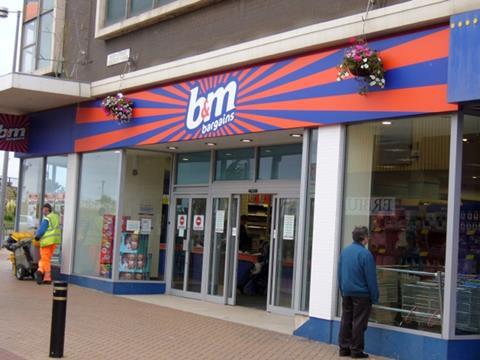 B&M is to create 4,000 new jobs in the next two years as the expansion plans of the budget home store retailer become more ambitious. B&M, whose chairman is Sir Terry Leahy, the former Tesco chief, has 500 stores and plans a total of 850 — a conservative number, say watchers of the company. The company believes that it can expand in Europe with a new brand of retailing that promises cheap deals and proper service. (The Times £)

“Bargain basement chain B&M Bargains is making billions from birdseed, batteries and other bric-a-brac,” writes The Daily Mail. “It is famous for stocking hundreds of low-cost items – like a modern day Woolworths.”

Tate & Lyle, the ingredients maker best known for Splenda sweeteners, has reported a fivefold increase in profit, as it recovers from a crash in sucralose prices that had sent its share price tumbling. (The Financial Times £)

The Times’ (£) Tempus column says Tate & Lyle’s shares currently look decent value. It writes: “Under one of those five-year plans loved by chief executives, Tate expects to get 70 per cent of profits by 2020 from speciality food ingredients, with 30 per cent of sales from Asia Pacific. It also wants $200 million of sales from new products. That should take care of growth, provided there are no slip-ups.” The Times (£)

The chairman of the work and pensions committee investigating the collapse of BHS has criticised advisers to the consortium which bought the retail chain for “pulling down the drawbridge”. A joint committee of MPs holding inquiries into the demise of the retailer struggled this week to get to the bottom of the advice that Grant Thornton, the accountants, and Olswang, the law firm, gave to Retail Acquisitions before it bought BHS from Sir Philip Green’s family for £1 last year. (The Times £)

US Foods, the private equity-owned food distributor, jumped more than 8% in its trading debut on Thursday, a bright spot in what has been a lacklustre market for US listings this year. (The Financial Times £)

Pets at Home increased its dividend by 39% after strong demand for its veterinary and grooming services boosted group sales by 6.7%to £777.8m (The Telegraph). Pets at Home has outlined plans to create 450 new jobs this year as the British public continues to splurge big money on grooming for their cats and dogs, helping the retailer post bumper results. (The Daily Mail)