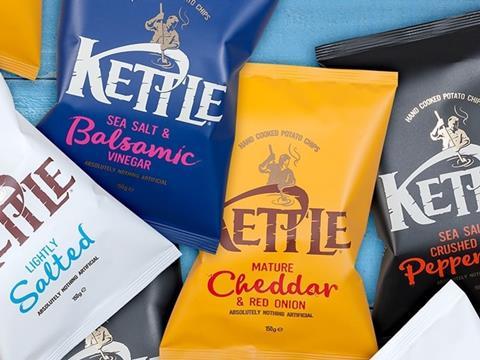 The owner of grocery brands including Kettle crisps and Rowse honey is to launch an auction that could fetch more than £1.5bn and cement its status as one of Europe’s biggest privately owned food producers, according to Sky News. Valeo Foods’ owner CapVest has appointed Goldman Sachs to oversee a sale of the company in the coming months.

Pepco, the European discount chain that owns Poundland, has reported resilient sales growth in its most important trading quarter to the end of December as its owner restarted the process of selling it off (The Financial Times £).

Pepco said its Poundland stores in the UK and Dealz stores in Ireland were suffering from ’significantly reduced football as swathes of shops remain shut (The Mail). However, in the three months to December, like-for-like sales at Poundland increased by 4.3%.

An opinion piece in The Guardian written by an anonymous supermarket worker says that the job has become more dangerous than ever this lockdown.

The Financial Times (£) runs a Q&A on Tesco returning almost £5bn to its investors via a special dividend from the sale of the Asian business.

Online supermarket shopping has skyrocketed as Britons in lockdown buy their food from home like never before. However, The Mail asks; ”Will this last and can it be profitable?”.

Yodel boss Mike Hancox hailed the online delivery boom as the “catalyst” for his company’s changing fortunes as the UK courier heads for its first annual profit since its launch more than a decade ago (The Financial Times £).

The UK pig industry has asked the government for help after Brexit-related border problems and an influx of cheap European meat led to more than 100,000 surplus pigs backed up on farms around the country (The Financial Times £).

Imperial Brands is pivoting back to cigarettes, an area that the new chief executive said had been “neglected” as the UK tobacco group became “overly focused” on vaping devices and other alternative nicotine products (The Financial Times £).

The move is part of a five-year strategy to revive the maker of Davidoff and L&B cigarettes (The Times £).

The owner of the Boots has appointed Roz Brewer as chief executive, making her the only black woman to lead a Fortune 500 company (The Telegraph).

Walgreens Boots Alliance has hired Roz Brewer from Starbucks as its new chief executive in a move that allows Stefano Pessian, the septuagenarian architect of the business, to move aside to become executive chairman (The Times £).

The boss of Deliveroo is set to gain a fortune of more than £350million from the food delivery firm’s blockbuster float (The Mail).

Pubs and restaurants lost £200m a day in 2020 as coronavirus restrictions caused sales across the hospitality sector to more than halve (The Telegraph).

Former M&S boss Lord Rose has asked the government to assess the impact from decisions over the future of Arcadia and Debenhams, after the failed chain stores did not secure rescue deals that retain shop staff and keep outlets open (The Times £).