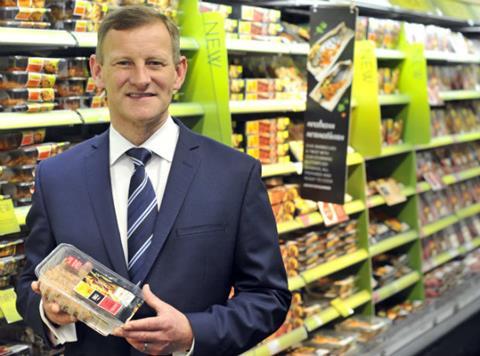 Marks & Spencer chief executive Steve Rowe has launched a broadside against arch rival Waitrose, insisting he can offer ”better quality and better prices” as he prepares for his new food delivery service (Mail on Sunday). Rowe last week agreed a landmark deal to oust Waitrose as the main partner of delivery firm Ocado. Last night, sparking a war of words between M&S and Waitrose, Rowe told The Mail on Sunday: “I don’t think anyone is going to lose out. Ocado customers will get a better range, better quality and better prices. We are perceived as being more expensive. But we’ve made major changes over the last few months. Now we’ve got to change the message and we’ve got to keep working on it.”

“Grocers are eager to fulfil online customer orders but are struggling to find the best route to success,” writes Jonathan Eley in an analysis about online grocery for the Financial Times (£). “Rowe is convinced that, despite its long gestation and high upfront cost, the M&S venture with Ocado will generate value. If it does not, it will hardly be the first to struggle.”

“On the surface, the deal, under which M&S will replace Waitrose as Ocado’s sourcing partner in 2020, looks expensive,” writes Oliver Shah for The Sunday Times (£).

“Investors may be rueing a cut in the dividend, but M&S can’t stop there,” writes Graham Ruddick for The Times (£). “M&S’s share price fell by more than 12% in response. However, if anything, the significance of this move by M&S is being underplayed.”

The departing boss of insurer Direct Line and the outgoing chief executive of travel retailer SSP are in the running to succeed Sir Charlie Mayfield as chairman of the John Lewis Partnership (Sunday Times £). Paul Geddes and Kate Swann are among external candidates for one of retail’s most high-profile roles, The Sunday Times can reveal. The internal favourite is finance chief Patrick Lewis, whose great-grandfather founded the company in 1864 — though sources close to the process expect an outsider to be appointed for the first time in John Lewis’s history, given the scale of its challenges. The search for a new John Lewis chairman comes at a challenging time for the employee-owned business, with the retailer considering suspending its staff bonus for the first time in 66 years in the wake of the worst Christmas for retailers since the depths of the financial crisis (The Guardian).

Tens of thousands of John Lewis staff are on tenterhooks as they wait to learn whether the member-owned partnership will scrap their annual bonus for the first time in living memory (The Times £). The department stores retailer, which also owns Waitrose supermarkets, decided at a board meeting yesterday whether to pay a bonus for the year as it battles the downturn on the high street and a price war (Daily Mail).

Amazon plans to open dozens of grocery stores across the United States as it looks to expand in the food business, the Wall Street Journal reported on Friday, citing people familiar with the matter (The Guardian). The company, which bought the upscale Whole Foods chain for $13.7bn in 2017, is now in talks to open grocery stores in shopping centers in San Francisco, Seattle, Chicago, Washington DC and Philadelphia, the Journal report said.

Supermarket shares turned lower on Friday, with investors relegating the stocks to the discount bin following a report that Amazon is planning to open dozens of grocery stores across the US (Financial Times £). According to the Wall Street Journal, the ecommerce giant is stepping up its push into the food business.

The United States has indicated that it will push to get food including chlorinated chicken and hormone-fed beef on to British supermarket shelves under a post-Brexit trade agreement (The Times £). US officials revealed proposals to remove barriers that “unfairly” prevent agricultural producers from exporting to the UK as they drew the battle lines for negotiations. In a 15-page document, the Office of the US Trade Representative detailed what it hopes to achieve from an agreement with the UK, once Britain leaves the EU (Sky News).

Millions of British lambs may have to be slaughtered and then buried or burnt, rather than eaten, in the event of a no-deal Brexit, government officials have told farmers (Sunday Times £). This is because UK lamb may be banned from sale to the EU from March 30 under meat hygiene rules applied to non-EU countries. If exports are allowed to continue, they would face tariffs of 45%.

Bar chain Revolution on Friday downgraded its profit guidance for the year and put its new site openings on hold, citing “challenging” trading conditions (Financial Times £). Investors in Revolution Bars Group who rejected a 203p-a-share bid from Stonegate Pub Company must be feeling bruised after the company scrapped its dividend, sending the shares tumbling by 22% to 62p (The Times £).

Activity is holding up at factories because they are stockpiling for a no-deal Brexit, according to Make UK, the manufacturers’ organisation (The Times £).

“Export specialist Ramsden International may offer an example to others fretting about the future,” writes James Hurley in The Times (£). “While Sean Ramsden predicts that leaving without an agreement would have its “ups and downs” for the company, the overall message — from a man who already trades lots of relatively highly regulated products in many markets with tariffs and other trade barriers — is upbeat. He is, he says, “cautiously optimistic”.”

Alka Seltzer should come with a health warning as a daily dose contains as much salt as 20 bags of crisps, watchdogs have warned (Telegraph £). A study by Which? discovered surprisingly high salt levels in popular branded effervescent soluble painkillers and other medicines, which experts said could cause regular users to far exceed their recommended daily allowance.

The family office of Jeff Bezos, the billionaire founder of Amazon, is among the investors in a $30m funding round for a Chile-based start-up that uses machine learning to create vegetarian alternatives for animal-derived products such as mayonnaise and ice cream (Financial Times £).

People in France are being warned to avoid eating poppy seed bread after tests found that it contained morphine and codeine which could cause intoxication, vomiting or nausea (Telegraph £).