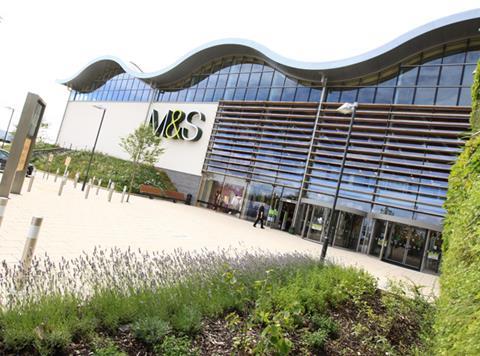 The continuing troubles of Marks & Spencer in general merchandise dominate the headlines this morning after it reported a 8.9% like-for-like first quarter sales drop in the division.

“M&S suffers biggest fall in clothing for ten years” is the headline in The Times (£), while The Telegraph says the 8.9% fall in general merchandise disappointed analysts and was due to the retailer “slashing the number of promotions in its shops and online”. The Guardian says new CEO Steve Rowe is trying to “end its reliance on heavy discounting” after more than 40% of its clothing was sold on promotion last year.

To further compound M&S’ day it had to reissue the figures later in the day and adjust its total group sales downwards. The Financial Times (£) writes: “When Marks and Spencer announced dismal sales figures on Thursday morning, its chief executive conceded they were “not the numbers I wanted to see”. By lunchtime, the once-mighty British retailer had retracted them, after discovering that in reality its performance had been even worse.”

The Daily Mail looks at “What’s gone wrong at Marks?” noting that a weak market, less promotions and late summer sale did the damage, but that analysts say results have fuelled fresh fears over Rowe’s overhaul plans.

The Times (£) writes: “For now, the market seems to be giving Mr Rowe the benefit of the doubt that he may finally be the chief executive to properly execute a strategy which M&S has been trying to pull off for more than a decade.”

The Guardian’s Graham Ruddick welcomes Steve Rowe “to the M&S merry-go-round” as the retailer has been going round and round in circles for years and years trying to fix its ailing clothing business. (The Guardian)

The City Diary in The Daily Mail also wonders: “Might the board consider replacing its aloof chairman, Robert Swannell, 65, seemingly immune to criticism during his five-year spell?”

Elsewhere, Shares in Associated British Foods rebounded by almost 9% as the owner of the cheap and cheerful Primark fashion chain spelled out the benefits of the fall in the value of sterling against world currencies (The Times £). Unlike many of its retail rivals, about half of Primark’s orders are in euros meaning that Primark will benefit from the slump in sterling following the EU Referendum vote (The Telegraph).

The Financial Times (£) writes: “Margaret Thatcher fetishised a rampant pound, as did George Osborne until the Brexit vote. But currency jingoism has some bad effects and a weaker currency — now at 30-year lows — has upsides, as corporate news shows.”

The FT’s Lex column looking at yesterday’s acquisition of WhiteWave by Danone writes: “There is a kind of inevitability about deals like these. Large, cash-generative companies everywhere are struggling to generate sales growth themselves, but can borrow very cheaply. Food producers will pay up for leading players in high-growth niches just as beverage groups will for craft brewers, or pharma giants for hot biotechs. That means happy days for foodie entrepreneurs, hipster brewers and academic scientists. The outlook for investors is less certain.” (The Financial Times £)

PepsiCo relied on home comforts as it beat market expectations for second-quarter earnings and raised its guidance for the year, joining the ranks of US multinationals looking inward amid slowing growth in emerging markets. (The Financial Times £)

The FT’s Lex column also looks at how Brexit is already being used as an excuse by UK retailers. ““Brexit” is the new “unseasonable weather”. If a public company sells things in the UK, and turns out to have sold less than expected, Brexit will be wheeled out, just as a cold snap would have been in years past.” (The Financial Times £)

Dominic Chappell’s consortium allegedly planned to write off debts that it owed to BHS and keep a stake in the retailer’s international business as part of a proposed rescue deal with Mike Ashley’s Sports Direct. (The Guardian)