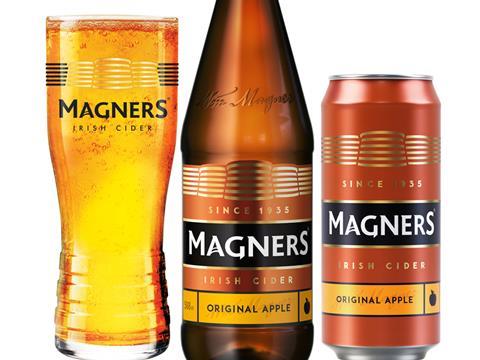 City analysts have reacted positively to news that AB InBev and C&C Group have extended their partnership, with the deal predicted to become “earnings accretive” in the mid to longer term.

The key change of the new partnership is a new distribution contract that will see AB InBev take over responsibility for the sale and trade marketing of C&C Group’s cider portfolio, which includes Magners, Chaplin & Corks and Blackthorn, in England, Wales, Isle of Man and Channel Islands. C&C will retain ownership of the brands and will continue to manufacture the drinks.

In addition, existing arrangements have been renewed for Dublin-based C&C Group to continue brewing, kegging, bottling and canning certain AB InBev products, while the Magners producer will also continue to distribute AB InBev’s beer portfolio in Scotland, Northern Ireland and the Republic of Ireland.

The two brewers have worked closely together since 2009, and their new expanded partnership was welcomed by City analysts.

“We see the AB InBev arrangements with C&C as affirming that not only has C&C the strength of distribution network in Scotland and Ireland to meet the requirements of a global player, but also that C&C has a quality cider brand that AB InBev is willing to promote with its own portfolio of international brands,” said Investec equity analyst Ian Hunter.

While not forecast to impact earnings in the first year, Shore Capital said it expected the deal to be “earnings accretive” in the mid to longer term.

Shore described the new terms of the partnership as an “interesting deal by C&C”, noting there had been no mention of AB InBev’s struggling Stella Artois Cidre brand, which competes with C&C’s core cider brand Magners in the named markets.

“We presume that the recent performance of Stella Artois Cidre has been below expectations and that AB InBev see the key competition as Heineken’s Strongbow, Bulmers and Old Mout cider brands,” says analyst Phil Carroll, adding Magners was “arguably a strong addition” to the AB InBev portfolio with its “more meaningful brand credentials” given the history of Magners and the fact it would not be seen as a brand extension in the eyes of the typical consumer.

C&C CEO Stephen Glancey said the group was confident the agreements would “continue to drive volumes over the long term for both companies”.

The deal is expected to be completed in the first quarter of 2017. The brewers said they were working closely together to ensure a “smooth transition process”, with no impact to service levels in the meantime. “We will be keeping a close eye on the progress of this deal as it feels like it has real positive potential,” said Carroll.