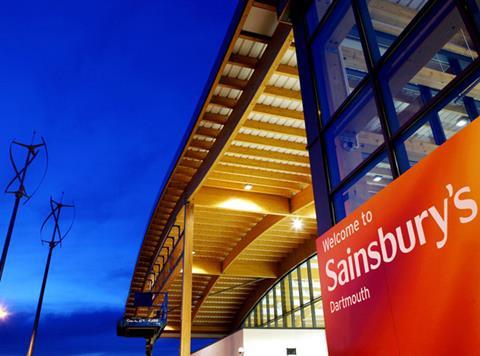 Sainsbury’s like-for-like sales over the third quarter were down just 0.4% (excl. fuel), with total revenues rising 0.8%. The seven days leading up to Christmas saw 30 million customer transactions at the supermarket, an increase of 2.6% on the previous year.

CEO Mike Coupe said that given the good performance in the 15 weeks to 9 January, Sainsbury’s now expected like-for-like sales in the second half to be better than the first when it recorded a decline of 1.6%. The supermarkets like for likes have steadily improved each quarter from 2.1% in Q1 to 1.1% and now 0.4% in the latest quarter.

“We have traded well during the festive period in a highly competitive market,” Coupe said. “Our stores delivered excellent levels of service and availability and we launched several new seasonal products and range improvements. As a result we have seen our market share grow in the quarter.”

Sainsbury’s reduced levels of vouchering and promotional participation year-on-year in the period, as well as the number of multi-buys in favour of lower regular prices.

“Food deflation and pressures on pricing will ensure that the market remains challenging for the foreseeable future,” he said. “We will continue to remain competitive on price and our performance this quarter provides further evidence that our strategy is working.”

He added the Christmas advertising campaign featuring Mog the cat was a “huge success”, with almost 37 million online views and the exclusive book topping the UK bestselling charts for four consecutive weeks and raising more than £1.5m for Save the Children.

Sainsbury’s opened 16 convenience stores in the quarter, with its biggest ever day for the channel coming on Christmas Eve. Groceries online sales also grew at almost 10% and orders by 15%, with a record week seeing more than 289,000 online orders delivered.

There was no mention in the trading update on the potential takeover of Argos and Home Base owner Home Retail Group. However, the supermarket did issue a 22-page slideshow presentation setting out its reasons for the bid entitle ’Accelerating our strategy for growth’.

Morrisons (MRW) lifted the spirits of the supermarket sector with a better-than expected performance over Christmas, recording a 0.2% rise in like-for-like sales – the first positive trading performance for four years by the beleaguered retailer. It sent shares at the business, recently demoted to the FTSE 250, up 8.7% to 165.5p – a price not seen since October.

Investor sentiment toward Tesco (TSCO) also took a healthier turn, with its stock up 6.7% to 155.2p to finish as the FTSE 100’s biggest riser. The share price will come under scrutiny again on Thursday when the supermarket reports its Christmas trading. It is Sainsbury’s (SBRY) turn this morning, and it also benefitted yesterday with shares climbing 3.3% to 251.2p. Online rival Ocado (OCDO) rose 1.9% to 282.1p in a generally good day for grocery and fmcg stocks.

The FTSE 100 also gained 1% to 5,929.2 points on the back of the retail rally to halt the rot that has characterised the new year.

McBride (MCB) was another big riser, with its stock jumping 6.8% to 160p after a reassuring first half update.

The biggest loser of the day, by far, was one of 2015’s stock market darlings, Greggs (GRG). The high street baker’s shares plummeted by as much as 14% throughout trading and finished 10.9% down at 1,091.8p. Investors took flight after Q4 like-for-like sales growth slowed and, more importantly, weakening footfall on the high street in recent months meant less traffic in a spate of Greggs outlet across the country.