As the dust settles on the Scottish Independence Referendum result in which the no campaign won with 55% to 45%, industry bodies and suppliers give their reaction as well as looking forward to what happens next.

“Now that the people of Scotland have voted to remain part of the UK, we will continue to focus on what matters for our business as the implications of further devolved powers become clearer.

Scotch whisky is a very successful and growing export industry for Scotland. The future for this sector will remain bright provided there is no further regulation or taxation on the industry. This is important because in the world market, Scotch whisky competes fiercely with other categories, such as American whiskey, Irish whiskey and other whiskies.

We will continue to work in partnership with both the UK and the Scottish governments to ensure the most favourable business environment possible, both for Diageo and for the future growth and success of Scotch whisky as an industry.”

“The people of Scotland have made a historic choice against the background of the most profound national debate. We welcome the stability that this choice brings and now urge politicians of all parties to work to bring our country together.

The referendum debate has shown the need for government and business to collaborate to address long-term economic challenges. We will be looking closely at plans for further devolution within this context.  There must now be a renewed focus on improving the business environment so that Scotland’s economy can grow to everyone’s benefit.

The Scotch Whisky industry is determined to play a leading role in shaping discussions that are fundamental to the future success of our industry and our nation.”

“We remained strictly impartial during the entire referendum debate but it was clear to us that risk and uncertainty were always the biggest concerns for our members.

Hopefully the result means an end to many of these uncertainties. With the final settlement of the independence debate we would

urge the Scottish government to work with us to ensure we create the best economic conditions for a successful, sustainable and independent convenience store industry in Scotland.”

“The people of Scotland have spoken. This vote signals the start of a fresh chapter of devolution, with greater power and more economic responsibility for Holyrood and the Scottish government. The retail industry is the country’s largest private sector employer, serving a quality retail experience to millions of customers each day, and the SRC and our members look forward to engaging constructively and positively to ensure that the further powers to be devolved are implemented in a sensible and cost effective manner.

More powers, however, shouldn’t be seen as an end in themselves. Scotland is a great place to do business, and our politicians will enhance our prospects even further by prioritising a competitive and attractive environment for retailers and others to invest.”

“Whilst the decision has been made for the constitutional status quo, as far as fishing is concerned there will most definitely need to be change in how we work together as an EU member state.

For the last 18 months, the Scottish government has lived in two parallel universes: engaging in normal business such as international negotiations, but pursuing at every opportunity the argument for separation.  The Scottish government had a mandate for this and it was absolutely right and necessary for the referendum process to run its course.

But now that the referendum is over, the Scottish and UK governments need to work together as closely as possible.  There are many challenges facing fishing, most notably the forthcoming discards ban, which has the potential to devastate our fishing fleets.  We have had enough arm-wrestling during the independence debate, now is the time to work as a united team to get the best deal possible for fishing.  We will be contacting both Fisheries Ministers in the coming days to set this in train and we are committed to playing our part in the process.”

“The fact that Scotland’s business owners and leaders spoke out on both sides of the debate highlighted the difficulty faced by many employers and employees when deciding on which way to vote.

Many of our members, and other small businesses owners, will be relieved with the outcome, given the uncertainty for business which has been created throughout the campaign, which would have surely continued in the event of a yes vote. Others will be frustrated having seen business opportunities in an independent Scotland.

For all business owners, regardless of the way they voted, it is now vital that they focus on growing their businesses over the coming years with a relative platform of stability. The Forum of Private Business will ensure their voice is heard by Scotland’s leaders to help positively influence the use of additional powers that Westminster has already promised to grant them.” 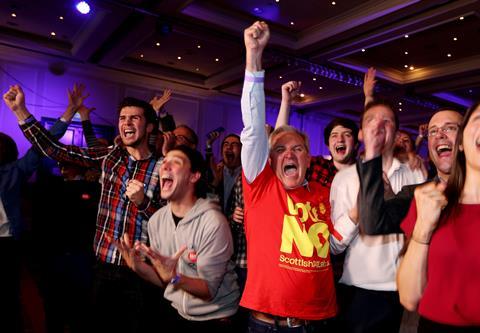