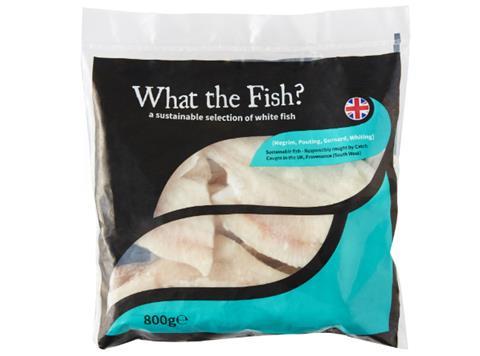 Iceland is aiming to tempt consumers into trying lesser-known fish with the launch of a fish fillets bag, made entirely of bycatch species.

Its frozen What The Fish? bags contain at least two fillets each of whiting, megrim, pouting and grey gurnard (rsp: £8/800g). The varieties are often caught unintentionally while fishing for popular species like cod, haddock or salmon.

In total, around 38 million tonnes of sea life is caught unintentionally each year, amounting to 40% of the global fishing yield, according to the WWF.

Meanwhile, the UN Food and Agriculture Organisation has said 90% of the world’s fish stocks are now fully exploited or overfished, with the figure set to rise as a 17% increase in production is forecast over the next seven years.

Iceland said it hoped to make eating fish more sustainable by tempting consumers with a wider variety of fish species that would otherwise go to waste. However, the new range was a teritiary brand and would not carry the retailer’s responsibly sourced SeaKind label, Iceland confirmed.

Ahead of the launch, the frozen discounter commissioned attitudinal research around bycatch, finding nearly 80% had never heard the term before. However, once informed seven in 10 said retailers should make more effort to reduce bycatch or put greater emphasis on selling non-target species.

“Enjoying fish that is traditionally seen as bycatch gives us more variety and also helps make eating fish more sustainable. The more that supermarkets can do to encourage customers to try new options, the better for the planet,” said Iceland MD Richard Walker.

Trade marketing manager at Seafish, Andy Gray, welcomed the launch as a way to encourage consumers to widen their repertoires and lessen demand on the more common products.

The retailer’s head chef Neil Nugent added: “We wanted to make these species available to more shoppers to help them widen their repertoire of white fish. We are also clearly helping to improve the sustainability of UK fisheries by not discarding good, edible fish as waste, or racking up more miles of transport by sending it to markets overseas.

“What the Fish? is a natural continuation of our sustainability commitment, which has seen Iceland become the UK’s first major supermarket to commit to removing plastic packaging and palm oil from its own-label food.”

Read next: Fish counters: eight examples of brilliant merchandising from around Europe