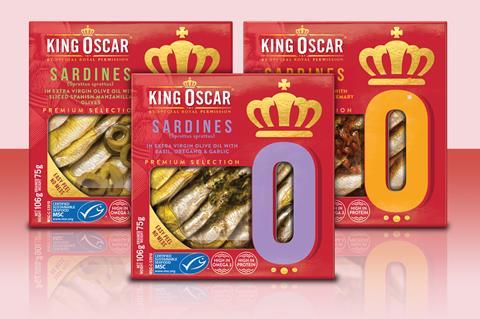 King Oscar sardines go on sale in Waitrose on 6 July

John West Foods will launch its Norwegian sister brand King Oscar in the UK for the first time next week.

The premium Thai Union-owned seafood brand was launched in 1873 as the Stavanger Canning Company and was renamed in 1902 in honour of the king of Norway. It now boasts an 85% market share in Norway for its sardines range [Nielsen YTD w/e 12 June] and is Norway’s second largest canned fish brand overall, offering products such as mackerel, tuna and speciality seafood.

It is also available in a number of other international markets, including the US, Japan, Australia, China and South Africa, and will hit UK supermarket shelves on 6 July with a listing in Waitrose for a trio of its MSC-certified sardine products.

The brand’s launch in the UK represented part of John West’s wider category growth strategy, and enabled the canned fish giant to target a different audience with a “super premium” product range, while also responding to a surge in demand for sardines, it added.

“For more than 100 years, we’ve upheld a tradition of uncompromising quality and market leadership,” said Jon Burton, international marketing director of John West Foods. “King Oscar shares this ethos and we’re excited to launch the brand in the UK.”