Labour calls for petfood labels to include fish origin information 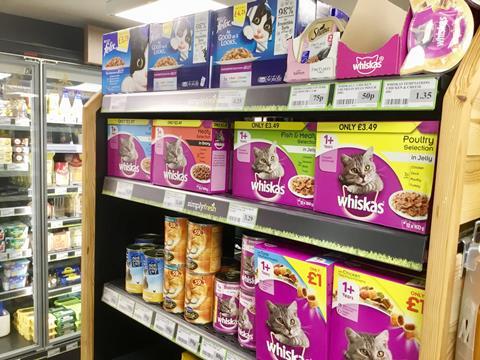 Increased customer awareness of food provenance has pushed retailers to include labels of origin on fish for human consumption, but the same standards do not apply to petfood.

Pollard claimed the absence of origin labelling made it impossible for customers to know whether the contents were responsibly sourced.

“After the scandal of the horsemeat being found in our food, it’s only right that what’s on the side of the tin is what is actually in the tin,” he said. “Britain needs a robust labelling regime to ensure that the contents of any tin is clear so pet owners can make informed choices.”

“I will be writing to the secretary of state and asking how government is ensuring that illegal, unreported and unregulated fish is not found in these products.”

Britain’s cats consumed 508k tonnes of food in 2018, according to the Pet Food Manufacturing Association. This included more than 50k tonnes of fish.

But many of the most popular ingredients, including tuna and mackerel, are under severe global threat from illegal and unreported fishing.

“There’s a whole unregulated element within these fisheries that can be either unregulated or illegal,” said Charles Clover, executive director at Blue Marine Foundation.

A recent study in the US found American petfood contained several endangered shark species, including hammerhead and shortfin mako.

The same situation could occur in the UK, said Clover. “We don’t know where the fish in petfood is coming from. We have no idea what it could be.”

The Sustainable Seafood Coalition, of which most supermarkets are members, pledged all fish products including petfood would provide labels of origin by 2017, an objective it has failed to meet.

“It is the responsibility of individual businesses to ensure alignment with the codes of conduct in their own supply chains,” said SCC co-ordinator Oliver Tanqueray.

“SSC members which sell other products containing fish – including petfood – will continue to collaborate in order to bring them in line with the codes.”