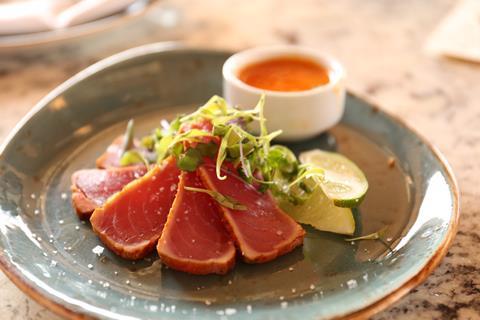 Yellowfin tuna from the Indian Ocean – one of the most globally important seafood species in the world – is under serious threat. But that’s not due to a lack of action from UK supermarkets and processors.

Contrary to claims made by the Blue Marine Foundation last week, the UK supply chain does not believe the Indian Ocean’s yellowfin stocks are being responsibly managed.

That’s why an independent group of retailers and suppliers took decisive action in 2019 by setting up the Global Tuna Alliance, which actively engages with regional fisheries management organisations, including the Indian Ocean Tuna Commission (IOTC), and their member countries to ensure tuna ultimately meets the highest standards of environmental performance and social responsibility.

Yellowfin tuna from the Indian Ocean is currently sold by several major supermarkets in the Global Tuna Alliance, who have sought to influence best practice through their supply chains at a fishery level, as well as using their combined commercial leverage to advocate for the adoption of effective policy by members of the IOTC.

Earlier this year, for example, the GTA issued a statement from the UK market urging IOTC delegations at the 2019 meeting in June to follow their own scientific advice and agree to a resolution that would rebuild the stock and ensure it was no longer overfished, nor subject to overfishing.

However, at this meeting, delegations failed again to halt the decline of the Indian Ocean yellowfin tuna population by only agreeing an overall catch reduction of around 10%. This was despite the IOTC’s own stock models in 2019 showing that a 20% catch reduction or more would be required to provide a 50% probability for the stock to recover. Following the meeting, India objected to the agreed measure and will therefore not be bound by it, further reducing its efficacy.

The latest nominal catch data, published in October, reveals the 2018 catch of yellowfin tuna increased from 2014 by 6.7% (from 396,635 tonnes to 423,393 tonnes). This is despite the fact that the IOTC had already previously agreed a reduction in yellowfin catch of 20% from 2014 levels.

Retailers and their suppliers have all made firm commitments to source responsible seafood from well-managed fisheries. Regrettably, yellowfin tuna from the Indian Ocean is still not meeting these requirements, and the agreed cut in 2019 will not lead to a stock recovery.

Nonetheless, prudent decision-making by IOTC delegates at the 2020 meeting can rectify this situation, and some Global Tuna Alliance partners have chosen to continue sourcing yellowfin tuna to support decision-makers and maintain commercial influence.

We agree that time is running out for these decision-makers to act responsibly, and in 2020 will continue to call for the IOTC to agree a clear rebuilding strategy for yellowfin tuna that is equitable, proportionate and impactful.

Should an agreement between member states, in line with advice from the scientific committee, prove impossible in 2020, then individual supply chain members will be forced to re-evaluate their purchasing decisions.