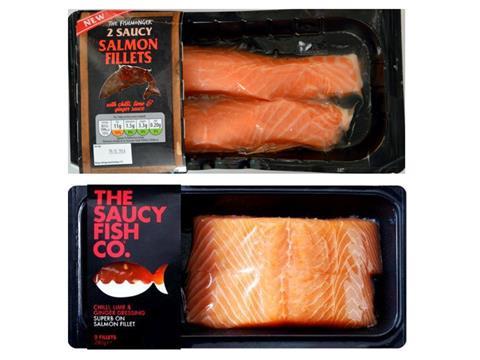 Saucy vs Aldi: not a particularly brazen copycat, according to some trademark experts

News last week of the Saucy vs Aldi ‘copycat’ spat would have been music to many brand owners’ ears. The UK has one of the world’s most prolific markets for own-label lookalikes, but it’s rare for disputes between supermarkets and brands to result in legal action.

Prior to Saucy making headlines, the most recent high-profile case dated back to 2009, when Diageo took on Sainsbury’s over Pitcher’s, a lookalike own-label version of Pimm’s. That case ultimately settled out of court.

So does Saucy’s decision to buck the trend and go public suggest this is the start of a new era of fightback from brands against own-label imitators?

Some brand owners clearly hope so. “I agree with the Saucy fish Co’s actions,” wrote one anonymous commentator on The Grocer website this week. “As someone who has just spent three years putting together a new product for launch this year, it is outrageous that the supermarkets can do this.”

But legal experts are less convinced. Legal action is rare partly because the UK affords brand owners less legal protection against copycats than other jurisdictions.

More often, however, the decision not to go to court comes down to one simple reason: it’s bad business to sue your customer. “Often there is a compelling legal case, but action isn’t taken for commercial reasons - typically fear of being delisted,” says Roland Mallinson, a partner in the trademarks, copyright and media practice at law firm Taylor Wessing. “There are lots of these claims being considered, but they are generally either not pursued or resolved out of court and so not publicised.”

Indeed, some experts don’t even consider the Saucy case a particularly outrageous example of brand imitation. “There are many lookalike products out there that are just as brazen,” says Mallinson, while another lawyer describes the Aldi product as “a fairly classic lookalike”. He concedes, however, that Aldi may have “pushed the envelope a bit” by not using the Aldi name on the front of its Saucy salmon packs, therefore potentially making it easier for consumers to confuse the product with the Saucy Fish Co.

Aldi could also be more vulnerable than other retailers to legal action from brand owners because its market share is still comparatively small and it doesn’t typically stock brands. “If they are not a huge customer of the brand, this makes action less commercially risky,” says Mallinson.

Even so, succeeding in court is no easy task. The legal landscape has shifted somewhat in brands’ favour thanks to recent EU court rulings, but the burden of proof remains high. “There are a lot of people out there who really feel these kinds of lookalikes are unfair and there should be a way for the law to protect them, but that doesn’t mean there is,” warns Kate Széll, a partner at Venner Shipley.

The fact Saucy managed to secure an interim injunction against Aldi is not an indication of its chances should the case go to trial, Széll adds. “All you need to get an injunction is an arguable case - the court doesn’t actually look into the merits of the case at that stage.”

For the time being, the battle lines between Saucy and Aldi remain firmly drawn. Aldi declined to comment further this week, but Saucy owner Icelandic Seachill says the discounter has challenged it over going to the press with the case. “Aldi are clearly unhappy about the press coverage of the last few days and have demanded we recall our press release about the interim injunction,” says sales and marketing director Simon Smith. “However, we are confident our facts have been presented accurately and stand by our release.”

Despite such fighting talk, Smith adds that Icelandic remains “open to the possibility of a commercial resolution to the dispute”. And that is precisely what legal experts expect to happen. “Both companies stand to lose a lot of money in terms of legal costs if they decide to litigate - I imagine they will settle this sensibly,” says one lawyer.

Széll also has her money on an out-of-court settlement, though she is holding out hope for an interesting showdown in court. “A lot of these cases end up settling, and I expect this one to settle as well, though it will be more interesting if it doesn’t.”