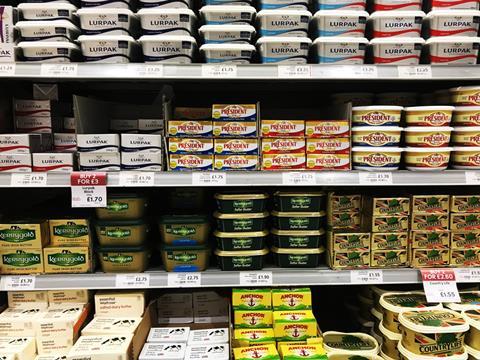 The price of block butters in the major supermarkets has risen by nearly 10% during the past year, amid soaring wholesale prices caused by low milk fat supplies.

Warnings of supply shortages last autumn appear to have finally translated into retail and wholesale prices. Average prices have risen steadily since September 2016, when producers first warned of impending shortages.

Prices for the overall BSM category are now 5% higher year on year across over 200 comparable SKUs in the mults [Brand View 52 w/e 19 May 2017], with the block butter category having seen the biggest price rises.

A combination of base price increases and a reduction in promotions have led to big hikes on brands such as Country Life’s 250g unsalted block butter, which is 14% more expensive year on year (at an average of £1.47) after increases in Asda, Sainsbury’s and Waitrose.

The price of Lurpak’s slightly salted 250g block has also risen significantly, jumping by 9% to an average of £1.57.

It’s not just block butters that have seen big price rises. The shelf price of spreads has also increased year on year, up 4% across the mults.

Country Life’s 750g spreadable butter has risen by 19% to an average of £3.56 due to price increases in Tesco, Asda and Waitrose. However, away from spreadable butter, some spreads prices have fallen during the past year, with the recently renamed I Can’t Believe It’s So Good original 1kg tub down 7% to £2 after a base price decrease in Sainsbury’s.

The price rises are thanks to strong demand and tightened supplies across Europe, which saw butter production fall by 5% year on year to 13,000 tonnes in February.

“Prices got so low in 2016, and it wasn’t profitable for farmers to make as much milk. So, they started to cut back on their dairy cow numbers,” said Mintec analyst Michael Liberty.

“Butter supplies are now really tight across the whole of Europe and the UK, so anyone trying to buy butter is struggling and they’re having to pay a higher price just to reach a contract for it.”