Cheers! Price of Champagne is down 7% since Brexit 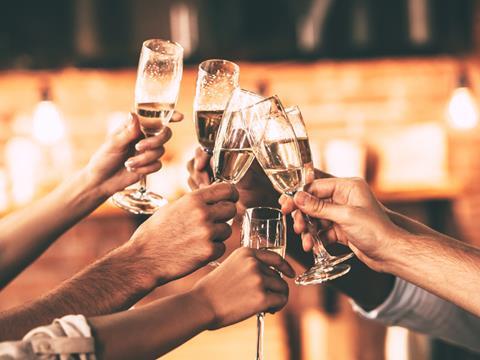 As fears mount over post-Brexit inflation, one European treat is bucking the trend: Champagne prices are down 7% since the June referendum.

The price drop comes as the mults prepare for a festive push on bubbly, but industry experts warn posh fizz won’t be this cheap again in a long time.

“In the face of continued growth from the less expensive alternative, and potential price increases due to the decline in the value of the pound, I would be very surprised if wine in general is not one of the very first categories where we see Brexit-induced price rises in the new year,” said Tim Eales, insight director at IRI.

Since the referendum, there have been a total of 471 promotions across 207 Champagne SKUs in the big five, analysis by The Grocer using BrandView data [29 June to 30 November] reveals.

This helped drive a 7% drop in price over the same period, compared with a more sober 3% year-on-year drop.

Moët & Chandon was the most promoted brand, accounting for 13.4% of total activity with 63 promotions, followed by Lanson (53), Bollinger (37) and Veuve Clicquot (34).

A flurry of promotional activity has also been seen on Prosecco, where there has been an unsustainable “race to the bottom” on price, according to Ian Thomson of Thomson & Scott, owner of Skinny Prosecco.

However, the weakening of the pound could spell the end of low prices, he added. “In light of the shortages experienced by the Prosecco category earlier this year, combined with the recent movements in currency, we believe pricing in the UK will increase over the next 12 months.”