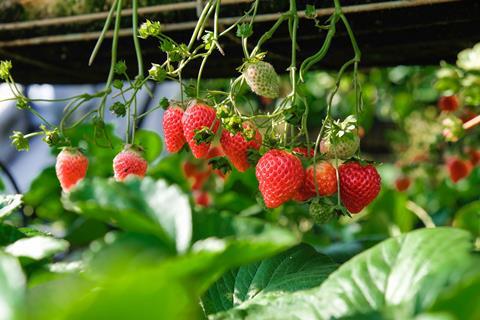 An early start to this year’s strawberry season has yielded 22% more fruit than the 2018 season, when growers were battling a freezing winter and late start to spring.

Most of the increase, calculated to the first week of May, is down to the warm Easter period, which allowed growers to begin harvesting two weeks earlier than they did last year, says chairman of British Summer Fruits, Nick Marston.

It comes amid a 9% increase in the amount of berries sold in the UK in the year to 21 April, according to Kantar. Brits bought 131,000 tonnes of strawberries over the 52-week period, spending £653m. Meanwhile, grower body BSF predicts demand will grow by another 9% in the coming year.

Many growers have switched to new varieties in recent years, which produce bigger fruits and higher volumes to cope with increased demand without drastically increasing harvest areas, says Marston.

“New varieties are coming to market like Malling Centenery, which look better and are quite considerably bigger than older varieties like Elsanta and Sonata,” he adds.

“It is now the principle commercial June-bearing fruit, and is well on its way to becoming the most widely grown variety.”

Growers are optimistic of a better season than 2018 this year, with cool but sunny conditions precipitating a steady supply of berries into summer.

However, the latter part of the season remains under threat by a dearth of seasonal labour, warns Marston. The BSF has slammed the government’s pilot SAW scheme as “inadequate” with its provision of 2,500 visas to non-EU labourers comparing to 60,000 issued by Germany.

“Farms have got enough people at the moment. The concern is that when those workers head home, the pattern of the past few seasons suggests we’ll have no one to replace them.”