How will Black Friday evolve? 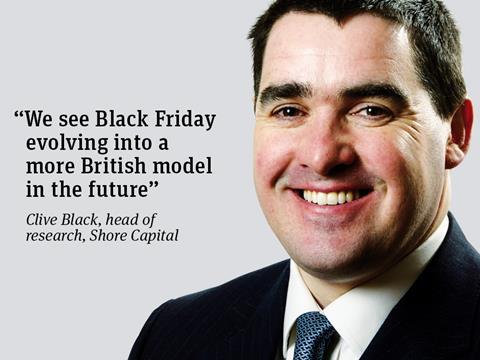 Young Americans helping the war effort came over, were attractive to many of the local young ladies and eventually went back home, some leaving longer legacies than others. Many high street retailers in the UK may have similar thoughts about Black Friday; introduced by retail Americana, it caused havoc in 2014 and 2015. Irony of ironies, Asda Wal-Mart did not participate in 2015.

Black Friday is much more about hard-line non-food, particularly electronics, than grocery. Yet the phenomenon is having a significant impact on the shopping habits of Britons, leading to a new peak around the November month-end.

The distortions to trade in 2015 corresponded with terrible weather, week in, week out, across the vast majority of the North and West of the British Isles, plus one or two other events that distracted the consumer. Collectively, not only did trading patterns adjust by time, they also changed by channel. The high street and town centre shopping centres really struggled with footfall while retail parks witnessed footfall growth. Superstores tend to be out of town, and this location alongside gradual improvements helped drive better-than-anticipated festive trade from the grocers.

Black Friday poses opportunities for grocers in that it is an event that can, if sensibly considered, provide a basis to sell complementary product. Morrisons and Tesco embraced this effectively in 2015; the latter online, too. That online performance leads on to one of the major outcomes of Christmas 2015.

While the web has been growing in non-food for many years, 2015 feels like a threshold where the technology and logistics have matured in a manner that will catapult further online participation for the foreseeable future. That said, we also see Black Friday evolving into a more British model. Retailers are starting to think more clearly about what they should and should not do around this event. That learning will be important in making Black Friday beneficial to retailers down the line, which will make for fewer profit warnings in future years. Black Friday remains a legacy, though, that the British are still trying to come to terms with.