Shoppers looking to make a saving this Pancake Day would be flippin’ mad not to opt for budget own-label ingredients - which are cheaper now than they were a year ago.

While the average price of core pancake ingredients - flour, eggs, milk and butter - have risen over the past 12 months at the big four supermarkets, lines at the value end of the retailers’ own-label ranges - such as Asda Smart Price and Tesco Everyday Value - have fallen in price.

As a result, shoppers will typically be paying 3% to make a batch of 12 pancakes than they did last year - but could be forking out 7% less if they go the budget own-label route (see graphic, above).

The steepest decline in budget own-label ingredients was plain flour, which cost an average of 33p per kilo in Feburary, down 13% from 38p in February 2013. In contrast, the average price of plain flour - branded and own-label - rose from £1.07 a kilo to £1.10.

Thrifty shoppers can also make savings on budget own-label eggs, with typical price of a pack of six value eggs down from £1.01 a year ago to 93p. On average, the price of half a dozen eggs has risen slightly, from £1.72 to £1.74, with branded eggs coming in fractionally pricier at £1.75 a pack.

UK whiting prices have increased as storms around the British Isles have led to fewer boats being able to fish, which has in turn resulted in a reduction in catches. As a result, prices are up by 21.1% over the past month and nearly 80% on this time a year ago.

The storms have also pushed up the price of plaice in the UK, which has risen by 23.8% month on month and is now up 40.3% year on year.

Meanwhile, bad weather in Norway - coupled with strong demand - continues to take its toll on the farmed salmon market, with prices now up by 31.4% year on year.

Elsewhere, fishing quota reductions continue to be the main driver behind price increases, with haddock in Norway now up by nearly 50% year on year because of quota reductions.

Meanwhile, skipjack tuna prices are falling thanks to weakening demand and good catches in Kiribati and Nauru waters. 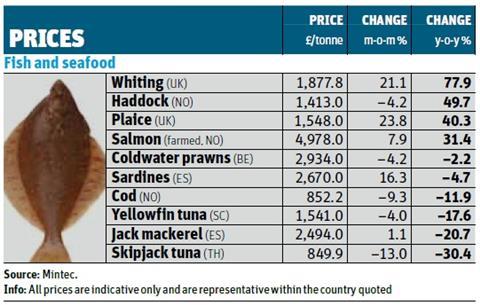