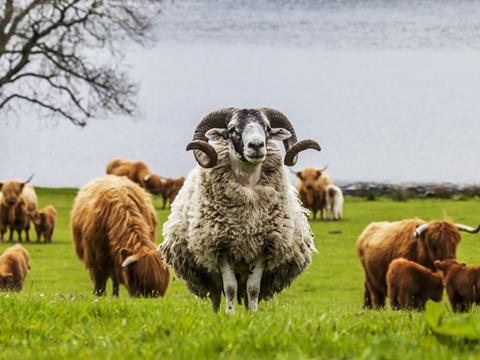 Farmgate prices for British beef and lamb remain high, though prime cattle prices are starting to ease amid “sluggish” beef sales, according to AHDB.

The GB average prime cattle price was 357.03p/kg in the week ended 3 February, which is 0.76p lower than during the previous week, AHDB’s latest market report reveals.

The industry has reported “sluggish” beef sales, it says, which has added to seasonal downward pressure as processors switch their focus to cows and manufacturing beef.

However, the GB average prime cattle price remains 6.8p higher than the price recorded in the same week last year and 2.92p above the five-year average, according to AHDB.

Strong demand for manufacturing beef has also pushed up GB cow prices, which increased by 1.5p week on week, to 248.3p/kg in the week ended 3 February.

Meanwhile, British liveweight lamb prices are now around 26p above last year’s levels having risen over the past three weeks. The GB liveweight OSL SQQ rose by 6.6p in the week ending 7 February, to 199.44p/kg, AHDB reveals.

Deadweight lamb prices are also on an upward curve, with the GB deadweight OSL SQQ rising 11.3p in the week ended 3 February to 426.7p/kg. The measure is currently almost 49p above the same week last year, according to AHDB.

It follows an 11% increase in UK sheepmeat exports to 77,000 tonnes from January to November 2017, driven by the drop in sterling following the Brexit vote, while imports fell by 9% over the same period.