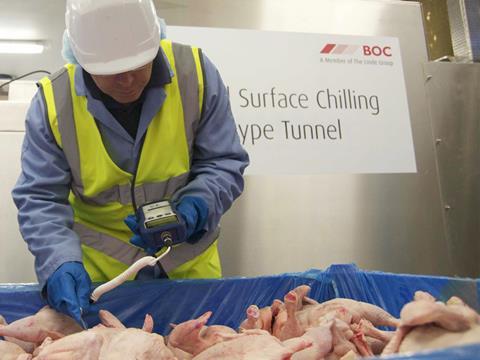 The Food Standards Agency has released the full-year test results on campylobacter in supermarket chicken this morning, showing that 73% of chickens tested positive for some level of contamination with the food poisoning bug.

It also confirmed no major UK retailer met the industry target on reducing rates of highly contaminated chickens during the testing period.

This is in line with the trends identified in previous quarterly test results released by the FSA.

The target set by the industry and the FSA is to reduce the prevalence of the highest level of contamination – with more than 1,000 colony-forming units per gram – to below 10% by the end of 2015.

The FSA carried out its tests before many major supermarkets announced new initiatives and technologies to bring down campylobacter rates, and the full-year figures do not yet reflect the impact these new interventions have had.

The FSA has today announced a second year of testing to start monitoring and quantifying the impact of the campylobacter initiatives recently introduced by retailers and suppliers.

New measures from Morrisons & The Co-op

Today, Morrisons said it had switched supplier at the beginning of the year in a bid to reduce campylobacter contamination, and had since seen the rate of chickens with the highest level of contamination drop to just 2.3% - down from 11.3% a year earlier.

The Co-operative, meanwhile, today said it would trial a raft of new measures to tackle the bug from 1 July, including new on-farm measures and paying bonuses to farmers for stopping the spread of campylobacter.

Waitrose and Marks & Spencer have also published detailed campylobacter reduction plans, with Waitrose today revealing new data from its supplier, Moy Park, showing a sharp reduction in the prevalence of chickens with the highest rate of contamination.

Other retailers have opted for technological interventions, with Asda last week saying it was moving to SonoSteam steam treatment for 30% of its whole birds.

FSA director of policy Steve Wearne said the progress shared by Waitrose, M&S, The Co-op and Morrisons was “really encouraging” and challenged other retailers to follow suit.

“We expect all retailers and processors to be achieving the reductions we have seen in these retailers’ figures – that’s the only way we will meet the target we all signed up to.”

The British Poultry Council said the industry was fully committed to tackling campylobacter. “Campylobacter is a naturally occurring bacteria and our knowledge and understanding of this complex bug is increasing quickly through dedicated research and practical trials of interventions,” it said.

“As highlighted by the FSA, individual producers and their retail customers are working bilaterally to trial options including enhanced biosecurity, management of thinning, improved processing, temperature treatments, and novel packaging. It is worth reiterating that campylobacter is killed by thorough cooking and cross contamination can easily be avoided by good kitchen hygiene practices.

“The BPC is committed to ensuring that when practical and effective solutions for beating campylobacter are developed they will be made available to all producers.”