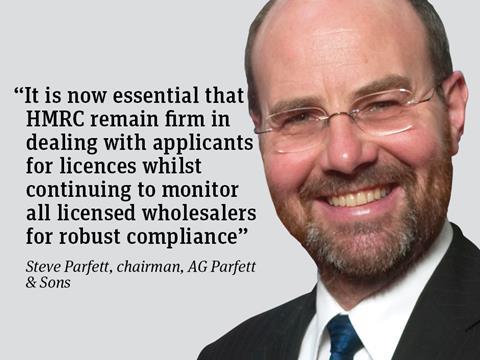 For most of my career in wholesaling the biggest frustration by far has been the ability of criminals to avoid excise duty on beer, wines and spirits and make enormous profit from crime, damaging legitimate wholesalers and depriving the country of billions of pounds that should have been spent on public services.

In the early stages of this activity it was primarily targeted at super strength beers. Even at this stage wholesalers were warning both government and HMRC that the consequences of not immediately acting aggressively and decisively on these issues would be catastrophic and we were proved correct as the major beer brands were brought into the criminal portfolio followed by spirits and wines.

Despite our sector making sustained and serious efforts to get action, we only had a relatively minor effect - duty stamps on spirits helped lessen the visibility of fraud in that area, but further upturns in activity in beer and especially major wine brands more than outweighed any improvement in spirits.

As the activity grew unchecked, huge profits and resources accrued to the criminals, allowing them seemingly unlimited opportunities to run rings round HMRC, culminating in several very discouraging successful appeals against convictions being upheld. During this time, and in marked contrast, HMRC had very significant success in disrupting the mobile phone VAT carousel fraud by making life as difficult as possible for criminals rather than attempting lengthy and potentially difficult prosecutions.

Despite our frustration we continued to work with HMRC and in an unusual development lobbied for more rather than less regulation for wholesalers, culminating after much work in the introduction of AWRS on 1 April.

I am pleased to say that even during late February and March we experienced a gradual improvement in sales of alcohol prior to legislation taking effect, and this has since continued to improve.

In what is almost a mirror image of the start of the problem, super strength beers have been the most visible and immediate beneficiaries. In these products there is very clear evidence that the supply chain has been disrupted, with brands that we had almost delisted as sales dropped to single figure cases per week now selling again in pallet quantities in some branches.

I am too long in the tooth to declare any sort of victory at this stage. It is now essential that HMRC capitalises on this improvement and remains firm in dealing with applicants for licences while continuing to monitor all licensed wholesalers for robust compliance.