Gove takes the F out of Defra with Goldsmith appointment 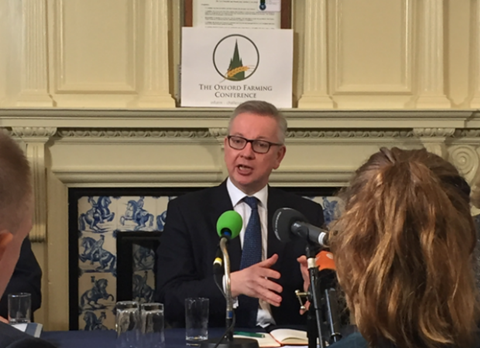 Presumably, Goldsmith missed the irony in the fact that he – a top opponent of our farming industry – has just been appointed to oversee future farming policy in the UK.

In fact, judging by his defensive exchanges with farmers on Twitter this week, the financier and environmentalist brother of MP Zac is a bit bemused by all the fuss his appointment to Defra’s non-executive board has caused.

I doubt Michael Gove is, though. The environment secretary is nothing if not astute and would have known exactly how farmers would react to his decision to give Goldsmith – who once claimed Britain’s upland sheep farming industry was the most destructive in the world – a political platform.

Which suggests he just doesn’t care about what farmers think. In fact, I’d argue Gove’s unabashedly political appointment of the mega-rich, anti-agriculture Tory donor proves he has no interest in winning the hearts and minds of British farmers as he ploughs ahead with his vision for a Green Brexit.

Nope, Gove’s only interested in the voters. And by taking the F out of Defra, he’s on a mission to win over a whole new raft of supporters by demonstrating that Tories don’t just hug hoodies, they can save the world too.

Perhaps Gove really does care about the environment, or maybe he’s just got his eye on no 10. Either way, there is a real threat that by failing to engage in constructive dialogue with our agriculture industry, and pursuing ‘greener’ policies at all costs, our environment secretary is going to sacrifice our food security at the altar of some idealistic vision of ‘Mother Britain’.

Now don’t get me wrong. Protecting our countryside is important, and I’d be the first to argue we need to do everything we can to promote sustainable agriculture. But sustainability isn’t just about the environment. It’s also about making sure we can feed our population beyond Brexit.

If Gove and Goldsmith wage a war on commercial farming in Britain, our supply chain will be reduced to a niche British food brand only the rich can afford. Everyone else will have to buy more cheap food from abroad – and with Brexit set to send the cost of EU food rocketing, it’s likely that would end up coming from countries whose food systems cause far more environmental damage than our own.

Which really would be ironic, unless Gove is playing a different game altogether. Call it a coincidence, but imposing policies that restrict British food production is a sure-fire way to pave the way for public acceptance of future free-trade deals with countries like the US. Shoppers might say they wouldn’t accept chlorine-washed chicken or hormone-infused beef imports now, but they would if British meat trebled in price.

Perhaps, rather than being at odds over future trade policy, Gove and Liam Fox agree on more than meets the eye.

Let’s hope not. Because Britain’s farming industry might not be perfect, but it’s far better than the US when it comes to sustainability. If Goldsmith thinks British sheep farming is destructive and our countryside riddled with factory farms, he should take a harder look at the reality of agriculture on the other side of the pond and elsewhere in the world.