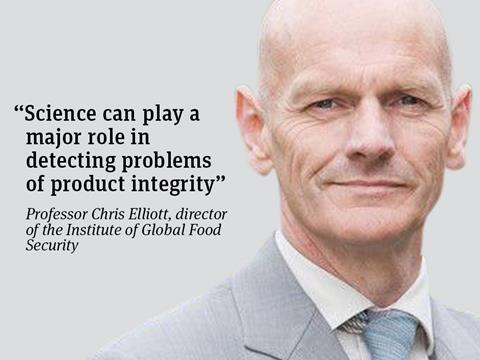 This week, a leading scientific journal published the method my research group at Queen’s University invented to detect adulteration of oregano. This was the technique we used to uncover widespread issues in the products on sale in the UK. Around one in four samples tested were tainted in some way.

This not only caused a stir in the UK but worldwide, and we have since been inundated with samples from all over the world. What is clear from this ‘international’ study so far is that food fraud is a truly global problem. When we have all the testing completed I will happily report the findings in The Grocer!

Over recent months, we decided to go back and resample across the UK to see if the situation had improved. I’m very happy to report it most certainly has, with very little evidence of contaminated product on sale. However, the product from one company that fell foul of our testing last time round has come up again as being adulterated. Interestingly, the adulterant we found present this time round is completely different from the last. As I normally do, I try to inform businesses that there may be a serious issue to be addressed and I thus contacted the CEO of the company by email with the following fairly clear message: “I believe you have a serious issue with the integrity of one of your products currently on sale.”

I left my phone number (two of them actually). Ten days on, I still await the call. Another thing I always do is make contact with the regulator, and, as ever, I will supply all the details we have on the samples we tested and leave the follow-up investigations in their capable hands.

I’ve reflected on our ‘oregano story’ and reached a number of conclusions: science can play a major role in detecting problems of product integrity (as a scientist I would say this, of course). We found clear economic data to show why oregano was targeted, and thus there are ways to think about predicting the next problem.

But finally and perhaps a little depressingly, it is also clear that food fraud is likely to be going on around us every day and the next scandal might be a lot closer than many of us think.