Meat in vegan ready meals: how worrying are claims? 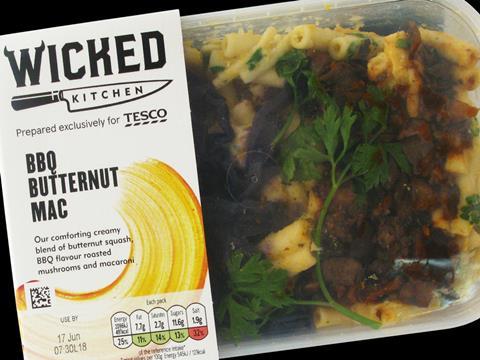 Meat in vegan and vegetarian ready meals. That was the sensational claim in The Daily Telegraph last weekend, after DNA tests it commissioned found “traces” of meat in two out of 10 supposedly meat-free products.

A German lab working for the paper found evidence of pork in a Sainsbury’s meat-free meatball SKU, while a vegan macaroni meal from Tesco’s flagship Wicked Kitchen range supposedly contained traces of turkey.

The claims have already prompted comparisons to the 2013 horsemeat scandal, and come at a time when meat-free diets are on the rise.

So how worried should the industry be about this latest food “scandal”?

One of the main challenges in assessing the significance of the Telegraph’s revelations lies in the lack of detail about precisely what kinds of tests were used. This is a key point as different testing methodologies come with different levels of accuracy and limits of detection.

Both Tesco and Sainsbury’s have challenged the Telegraph’s claims, with Tesco insisting its own tests had found “no traces of animal DNA”.

Food safety experts say the tests used by the Telegraph are most likely DNA tests based on either polymerase chain reaction (PCR) or next-generation sequencing (NGS).

PCR is “targeted so you know what you’re looking for, while NGS can be non-targeted where you take all the DNA in a product and cross-reference with a database to give you an opportunity to find unsuspected ingredients,” says Rosario Romero, a scientist in food authenticity at Fera Science.

Both techniques have their pros and cons, she points out. NGS is more expensive and requires a huge amount of processing power, while PCR often has challenges detecting at trace levels, or when DNA is degraded in processed foods.

Whichever methodology was used, we know the quantities of meat found were tiny, with the Telegraph saying they were so small the lab was “unable to given an exact quantification”.

This suggests the likely cause is cross-contamination rather than fraud, says Romero. Given meat is typically more expensive than plant-based ingredients, it’s hard to see a financial case for deliberate addition of meat to vegan products.

Professor Chris Elliott, who heads the Institute of Food Security and led a government review into the horsemeat scandal, says it’s important not to jump to conclusions. A tiny amount of animal protein could have been transferred by improperly washed hands or by someone touching some ingredients of the meal, he suggests.

“My bet is that if the 10 meals were tested for human DNA, a couple would come up positive. It doesn’t mean there’s a severed arm among the lettuce,” he adds. “Measuring DNA is a wonderful thing, but taken out of context it can be very misleading.”

That is not to say small traces of meat in a meat-free product are OK. The Food Standards Agency, which has launched an investigation following the Telegraph’s revelations, says there is no “acceptable limit” for meat traces in vegan products.

Consumers buying a vegan product have the right to expect that product to be 100% free of meat. No amount of cross-contamination, no matter how small or accidental, is acceptable. Food “should be what it says”, stresses a spokeswoman for the regulator, who adds the expectation “is that it is not contaminated and meets its description”.

The reality of ensuring absolutely zero cross-contamination, of course, can be rather more challenging. Especially as meat suppliers are exploring meat-free products as a way of hedging against the plant-based trend, these latest revelations are likely to prompt probing questions about the hygiene and segregation practices required to protect against accidental contamination.

While the Telegraph’s revelations clearly don’t have the makings of a new Horsegate, suppliers and retailers can ill afford to risk derailing the lucrative plant-based trend with another food scare.