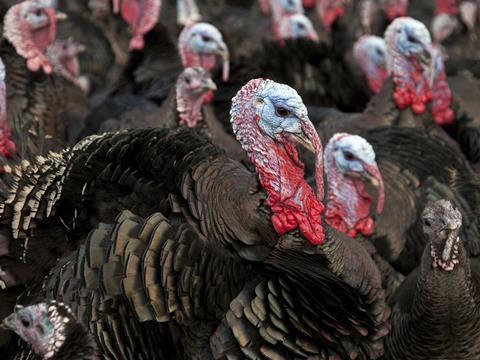 A new case of avian influenza has been detected on a turkey farm in Lincolnshire, Defra has confirmed, affecting some 6,000 birds.

A number of birds at the farm in the East Lindsey district had already died from the H5N8 strain of bird flu, said chief veterinary officer Nigel Gibbens yesterday (16 January), with the remaining live birds at the premises being humanely culled.

Defra has imposed a 3km protection zone and a 10km surveillance zone around the infected farm to limit the risk of the disease spreading.

The avian flu outbreak is the latest to hit the UK since the start of December, and follows the discovery of the H5N8 strain in a host of backyard poultry flocks, wild birds, and a separate Lincolnshire farm.

It was unlikely there was a direct link to previous cases “but a full investigation is under way to confirm this”, Defra said.

A national protection zone limiting bird movement, poultry shows and gatherings was declared on 6 December, and will stay in place until 28 February.

“We have taken swift action to limit the risk of the disease spreading, with restrictions in place around the affected premises. A full investigation is under way to determine the source of the infection,” said chief vet Nigel Gibbens.

“This finding reminds us that we must all be vigilant for signs of disease and take steps to minimise the risk of birds catching the disease from wild birds - either directly or through the environment,” he added.

“This means complying with the legal requirement currently in place to house birds or otherwise keep them separate from wild birds, and following strict biosecurity measures to minimise the risk of avian flu spreading via the environment.”

Public Health England said the risk to public health from the virus was “very low”, while the FSA added that bird flu did not pose a food safety risk for UK consumers.

“Poultry farmers are being urged to maintain high vigilance and bio-security,” said the British Poultry Council. “Investigations into the outbreak are continuing and the BPC is liaising closely with Defra.”