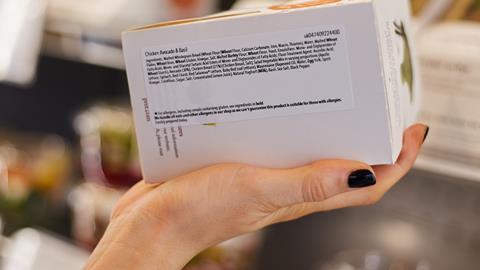 Pret's allergen overhaul: what are the changes and do they go far enough?

It’s been eight months since Pret a Manger CEO Clive Schlee vowed the chain would make “meaningful changes” in the wake of the death of Natasha Ednan-Laperouse. This week, Pret revealed its new ‘five-point allergen plan’. So what exactly is it doing? And should other businesses follow its lead?

The plan is based heavily on the recommendations of former FSA CEO Tim Smith, who was drafted in to conduct a comprehensive review of Pret’s food safety policies in October 2018, after it emerged a second customer, Celia Marsh, had died from a suspected allergic ­reaction to a sandwich.

A key principle to emerge from Smith’s review was “to make information available to consumers so they can make the right choice,” says Schlee.

As a result, full ingredient labelling is “at the heart” of Pret’s new allergy plan. And after a successful pilot in two stores in London, the chain this week began its nationwide roll-out of the new labels, with a view to having them in every store by the summer.

It puts Pret ahead of rivals in terms of allergen information. But perhaps not for long, with the FSA board this week agreeing that mandatory full ingredient labelling on pre-packed for direct sale foods (PPDS) should be the “ultimate goal”.

Moving to full ingredient labelling isn’t easy, says Schlee. “What you can’t do is just have rolls of labels for every single product you make. You’d end up with kitchens full of labels.” Pret’s “breakthrough” was to produce the labels by the batch, using barcoded recipe cards to print them on demand.

Read more: ‘Natasha’s Law’ can ensure some good comes of our daughter’s death

The approach has been welcomed by Allergy UK, which has “consistently championed full ingredient labelling in the ongoing consultation process around the labelling of PPDS foods”, says a spokeswoman.

Pret is also planning to share quarterly incident updates to ‘boost transparency across the food industry’. Again, it’s a move others might soon be forced to follow, with the FSA board approving plans for a reporting mechanism to gather data on allergic reactions caused by food served in catering establishments.

This sort of cross-industry intelligence is crucial to allowing businesses and regulators to react quickly to incidents, says Schlee. “In the case of Natasha, we didn’t hear about it for nine months,” he says. “And I think that completely impacted both the public response and Pret’s response to the situation.”

Another principle of Smith’s review was the importance of staff training. Pret plans to build on its allergy training programme, to put an ‘allergy champion’ in every shop and add an allergy question to its mystery shopper programme to check the right process is being followed.

It’s also rolling out tablets across its UK stores, for customers to search the menu, filtering out ingredients to find products that are right for them.

It doesn’t stop there. Pret has removed one or more allergens from over 70 products - including the sesame seeds from its stone-baked baguettes, which triggered Ednan-Laperouse’s fatal reaction. “We bought those baguettes from a company in France, and we were actually not a huge percentage of their production, so it took us a bit of time to persuade them to take out the sesame seeds,” adds Schlee. “But they’ve now replaced them with sunflower seed.”

The steps “demonstrate Pret’s commitment to initiating changes based on an understanding of the range of issues that their customers with allergies face”, says the Allergy UK spokeswoman. And they will, hopefully, inspire wider industry action. Because while Pret might have reformed its ways, many of its competitors are now lagging behind, and customers are still at risk.