If the UK strikes a post-Brexit free-trade deal with the US, will there be a stampede of hormonal beef and a flood of chlorine-washed chicken? And what do consumers think? 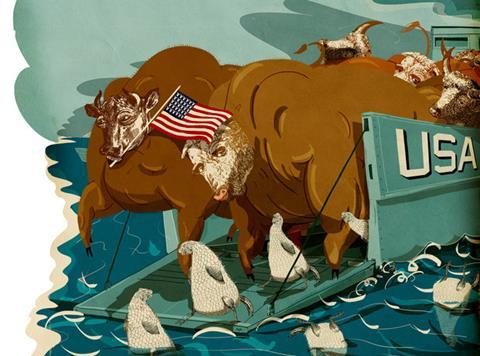 It might not rival Thatcher and Reagan quite yet, but the early courtship between Theresa May and Donald Trump left little room for doubt that the diplomatic duo intend to take that special relationship to the next level post Brexit. Everyone cringed at that hand holding. And their agreement to move to next base with a UK/US free-trade deal - reportedly made over a lunch of American-style beef ribs - has brought representatives from across the UK food chain together in revolt.

If the American Farm Bureau Federation has its way, such a deal will depend on Britain opening its borders to US foods currently banned under EU law - such as beef from cattle injected with growth hormones and chicken washed in chlorine, as well as unlabelled genetically modified (GM) foods. This - opponents argue - would undermine the UK’s unrivalled food safety and welfare standards, giving rise to a brave new world of chemically enhanced meat production.

So are concerns over US methods justified? Could post-Brexit trade deals flood Britain with lower standard meat? And how do consumers feel about the threat of ‘Frankenfood’ in Britain?

Most of the differences between food standards in the UK and the US spring from different principles, which are driven by different consumer priorities. US consumers, for example, are generally less concerned about animal welfare than Brits and Europeans. As a result, there are some big differences in animal welfare laws in the States, most notably the ongoing use of gestation crates - or sow stalls - for pork production. The UK banned sow stalls - metal cages used to contain female breeding pigs during pregnancy - in 1999 for cruelty reasons, followed by the rest of the EU in 2013.

And it isn’t just pigs that have a better life in Britain. Whereas UK poultry producers are required to clean out sheds between flocks, US producers are not - meaning American birds can end up standing in filth from multiple flocks. Not only is this a welfare issue, it highlights another big difference in the approach to food standards in the US. Europe and the UK take a ‘farm to fork’ approach to food safety, imposing strict controls at every stage from production to plate. “Requirements related to food hygiene and standards are required at each stage of production, manufacturing and processing,” says Eoghan Daly, manager of forensic and counter fraud services at Crowe Clark Whitehill LLP.

The US, on the other hand, relies heavily on ‘end of pipe’ solutions to ensure food is safe. “Critics suggest that end of pipe solutions are used to address gaps left by inadequate hygiene on farms and in abattoirs,” says Daly. “But it is not clear if this assertion is based on any evidence.”

One controversial end of pipe approach is US meat processors’ heavy use of antimicrobial agents to clean up carcases and remove any bugs - such as chlorine washes for chicken. Europe imposed a ban on poultry treated with chlorine, and three other antimicrobial rinses, in 1997 over fears residues left on meat could be damaging to health. European processors were prevented from using anything but potable water to clean carcases, and it became almost impossible for the US to export poultry to European countries as a result.

The European Food Safety Authority has since concluded treatment of poultry with the four antimicrobials used in the US - chlorine dioxide, acidified sodium chlorite, trisodium phosphate and peroxyacids - poses “no safety concern”. But the ban on chemical treatments remains, despite the US filing a dispute with the WTO, arguing European measures are an unfair barrier to trade.

There is another key difference between food safety regulation in the US and UK. In the US, science is king, and regulators will only act if there is a scientifically proven risk. The EU takes a more precautionary approach. “The ban on chlorine-washed chicken is based on consumer sentiment rather than scientific evidence,” says Daly.

People defending the US system would say it is a belt and braces approach that enhances consumer protection, he adds. Chlorine-washing would arguably offer another layer of protection against bugs like campylobacter, which are a big problem for the UK and EU.

However, British Poultry Council CEO Richard Griffiths says chlorination was one of the options explored as part of the industry’s work to tackle campylobacter, and it was abandoned because it wasn’t as effective as everyone thought at killing the bug. “Campylobacter is a great example of why the UK’s farm to fork approach works,” he adds. “We made improvements along the whole chain and managed to reduce it without the need to add chemicals.”

“Campylobacter is a great example of why the UK’s farm to fork approach works. We managed to reduce it without the need to add chemicals”

Europe has yielded on one decontamination treatment for meat. It authorised the use of lactic acid for beef carcases in 2012, following pressure from the US and “a very good science case” for how it could be used as a control measure for e.coli, particularly 0.157, says Phil Hadley, head of supply chain business development for AHDB Beef and Lamb.

However, the UK beef supply chain does not use lactic acid, because the high standards in British slaughter halls minimise faecal contamination, meaning there is no need to rely on chemicals to clean up the meat. “The Americans brought in lactic acid as a decontamination method as a particular response to the e.coli issues they were facing with burgers,” says Hadley. “We haven’t experienced the same problem, which would be the only valid reason for us to go down that route.”

The change in rules does mean America can export beef treated with lactic acid to the UK, but the EU’s blanket ban on beef from cattle given hormone growth promoters means very little US beef currently makes it across the Atlantic. 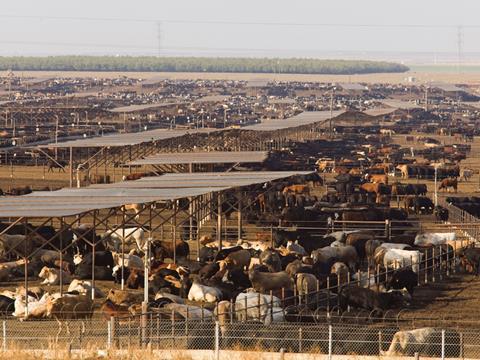 The EU banned the use of hormones to promote the growth of farm animals in 1981, restricting the use of such drugs by member states and imports from third countries. After objections from the US and Canada, which insist there is no scientific evidence to suggest hormone-treated beef has a negative impact on human health, a WHO panel ruled in 1999 that the EU measure was not in line with global trade rules. However, the EU appealed and most of the WTO ruling was reversed, with the exception that such a measure should be based on an assessment of the risk to human health.

In response, a European scientific advisory body re-evaluated the risks to human health from residues in beef from six hormones used for growth promotion in 1999 and concluded no acceptable daily intake could be established. Further reviews in 2000 and 2002 confirmed this opinion.

In order to appease the Americans, the EU has implemented a high-quality beef quota, which allows the US - and Argentina, Australia, New Zealand and Uruguay - to export a limited amount of beef that is demonstrably hormone-free to Europe. However, the US recently launched a fresh WTO complaint, arguing the quota is not enough, and insisting the hormone ban is a barrier to trade.

The determination with which the Americans are challenging the European ban suggests hormone treatment would be a “key negotiation point” for any free-trade deal with the UK, alongside wider acceptance of decontamination methods, says Hadley.

But it doesn’t necessarily follow that there would be a flood of hormone-treated beef on supermarket shelves. With supermarkets imposing increasingly strict British sourcing policies for fresh meat, the most likely opportunity for American beef would be in processed food products, but the US has a voracious appetite for beef, and is actually a net importer. “What they have available for export is mostly higher end steak cuts, so you might see strip loins and ribeyes come in for foodservice,” says Hadley.

Also, US beef wouldn’t necessarily be any cheaper than British beef, with the pound so weak against the dollar, making it even less likely to find its way into manufacturing, although that could change of course.

Chlorine-washed chicken would also be unlikely to make its way into the mults in fresh form, but frozen raw imports might creep into processed products, Griffiths warns. “It wouldn’t be significantly cheaper, but it would certainly be at a price difference to cause serious concern,” he adds.

Perhaps a bigger threat to British food standards is the fact the UK couldn’t change the rules for US meat imports without changing the rules for its own producers. “It is not compatible to accept products from one country that has a different process step or welfare standards to that which you impose on your own producers,” Hadley explains.

Hormone-treated beef? No thanks

And what of consumers? Brits wouldn’t be happy about compromising on standards, according to our exclusive consumer research, which found 63% of shoppers surveyed didn’t want to eat hormone-treated beef or chlorine-washed chicken, which is more than were opposed to genetically modified food (45%).

Almost half (47%) said hormone-treatment of beef was “totally unacceptable and shouldn’t be allowed under any circumstances”, while 35% said they wouldn’t be happy for UK chicken processors to use chlorine washing even if it could help tackle food health issues like salmonella and campylobacter, compared with 29% who would.

What do consumers think? 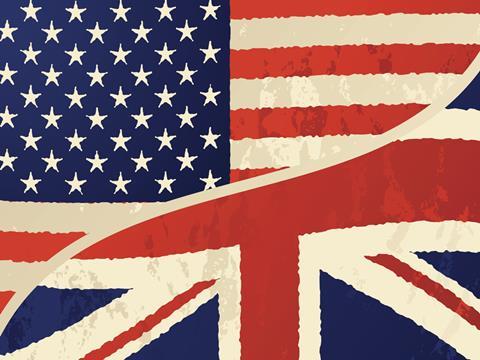 What do UK consumers think about the potential influx of American meat products into the UK? Do they care? Would they eat chlorine-washed chicken, and should the UK keep its current food standards after Brexit? Harris Interactive polled 1,043 consumers on their opinions. Here are their findings.

British meat processors insist they don’t want to adopt the US methods either. “We hope the government will defend our practices, because we think they are good practices,” says Griffiths. “We would be very concerned if the government looked like it was going to allow those sorts of trade deals.”

Furthermore, any deviation away from European food safety rules by Britain could threaten exports to the EU - our biggest market. It would also destabilise exports to third country markets, for whom UK controls are underpinned by European legislation and controls.

This would be disastrous for the UK meat sector, which relies on exporting to a wide number of countries to achieve optimum carcase balance. ABP UK CEO Tom Kirwan has called on government to resist any reduction in meat production standards - a position echoed by other processing and farming leaders.

The UK government claims it won’t compromise, with environment secretary Andrea Leadsom telling the NFU annual conference the UK would be “clear” in free-trade discussions, and would not “seek to put ourselves in an uncompetitive position” by reducing welfare or food safety or traceability standards.

But industry experts fear trade negotiations will focus on higher profile industries like aerospace, defence and automotive, with agricultural produce and food thrown in as “makeweights” to secure a deal.

Trump has already signalled his intention to be a strong advocate for US farmers and ranchers to assure “the fairest possible treatment of American interests in the US market and in other markets around the world”.

Will May go doey-eyed at the prospect of a US deal? Will the UK meat industry be offered as a gift in the negotiations? The industry - and the vast majority (75%) of consumers, hope not.