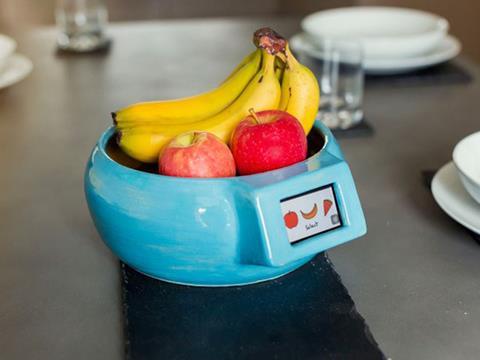 An 11-year-old’s invention could become an Ocado listed product after winning a competition run by the online supermarket.

Rumaan Malik’s ‘Alarm Cup’ fruit bowl alerts owners when its contents have two days to go before expiry. It features a mini touchscreen with icons for different types of fruit and sounds an alarm when they are due to go off.

It’s been crowned winner of Ocado’s Food Waste Challenge for five to 12-year-olds, run in partnership with Little Inventors, an initiative encouraging young people to share invention ideas. The competition was launched in April with the promise that an “amazing” entry could become listed on Ocado.

“I think we’ve uncovered something very special,” said Ocado’s head of corporate responsibility Suzanne Westlake. “We’re testing the prototype at the moment, but we’re certainly keen to explore opportunities to roll this out and make it available online for our customers. Watch this space.”

As the winning entry, Rumaan’s invention will be shown at the Discovery Museum in Newcastle as part of the Great Exhibition of the North running from 22 June until 9 September this year.

Rumaan, from Lincolnshire, said: “Apples are my favourite fruit, but they were always going all soft when my mum left them out in the fruit bowl and forgot about them. That’s when I thought of my idea and started drawing the Alarm Cup. I thought that we all need something that could help us use up our fruit by sounding an alarm before it goes off, instead of letting it end up in the bin.”

Other entries included an umbrella made of carrots and a wearable bowl for catching food dropped while watching TV.

Helen White, Wrap’s special advisor on household food waste and one of the competition judges, said: “We were particularly impressed by Rumaan’s invention as it addresses one of the key reasons food ends up in the bin: not using it in time.”